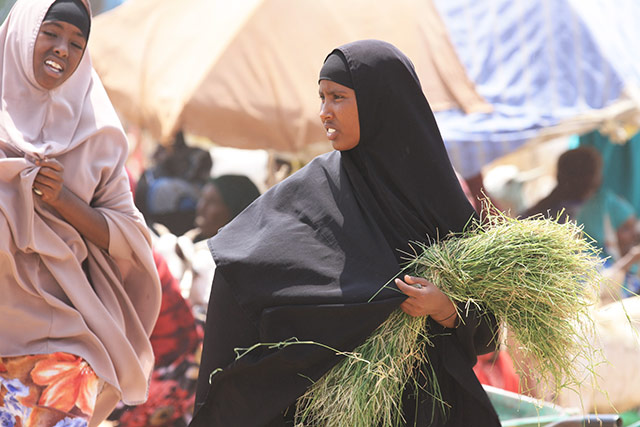 Despite improved food security following the Deyr harvest, improved livestock conditions, and mostly stable staple food prices, a large number of people across Somalia will be acutely food insecure through June 2015. Many children remain acutely malnourished, despite a small decrease in their numbers over the past six months.

An estimated 731,000 people will be in Crisis and Emergency (IPC Phases 3 and 4) through mid-2015, according to the latest findings from a joint assessment by the Food Security and Nutrition Analysis Unit for Somalia (FSNAU), a project managed by Food and Agriculture Organization (FAO) of the United Nations; the Famine Early Warning Systems Network (FEWSNET), a project funded by the United States Agency for International Development (USAID); and other partners. This figure represents a 29 percent decrease from the July-to December 2014 estimate. Internally displaced persons (IDPs) constitute 76 percent of the total number of people in Crisis and Emergency (IPC Phases 3 and 4), with the remaining 24 percent divided equally between rural and urban populations (12% each).

Results of 41 nutrition surveys conducted across Somalia from October to December 2014 indicate that an estimated 202,600 children under the age of five are acutely malnourished, including 38,200 who are severely malnourished and face a high risk of morbidity and death. Since July 2014, the number of acutely malnourished children has declined by 7 percent; the number of severely malnourished children declined by 13 percent. Current overall median Global Acute Malnutrition (GAM, 12.0%) and median Severe Acute Malnutrition (SAM, 1.9%) rates are lower, compared to six months ago (14.9% and 2.6%, respectively) as well as one year ago (14.2% and 2.6%, respectively) but these improvements are not statistically significant.

Urgent lifesaving humanitarian assistance and livelihood support is required for populations in Emergency and Crisis (IPC Phases 4 and 3) between now and June 2015 to help meet immediate food needs, including urgent nutrition and health support for the acutely malnourished, particularly children. Nearly 2.3 million additional people are classified as Stressed (IPC Phase 2) through June 2015 and require interventions to protect their livelihoods and build their resilience against future shocks. This group of households remains highly vulnerable to shocks that could push them back to food security Crisis or Emergency (IPC Phases 3 or 4).

Following are further details on factors that affected the reported food security outcomes:

Areas and Populations of Concern

Populations in Crisis and Emergency (IPC Phases 3 and 4) are found in large proportions (10% or more of regional total population) in Bari, northern and southern Mudug, Middle and Lower Juba, and Banadir Regions.

In agropastoral and pastoral areas that had below-average Deyr rainfall, many households are likely to become more food insecure until the start of Gu rains in March. In the areas that flooded in Middle and Lower Juba, households are expected to remain acutely food insecure until the delayed off-season harvest becomes available in March, after which point they will have increased access to food.