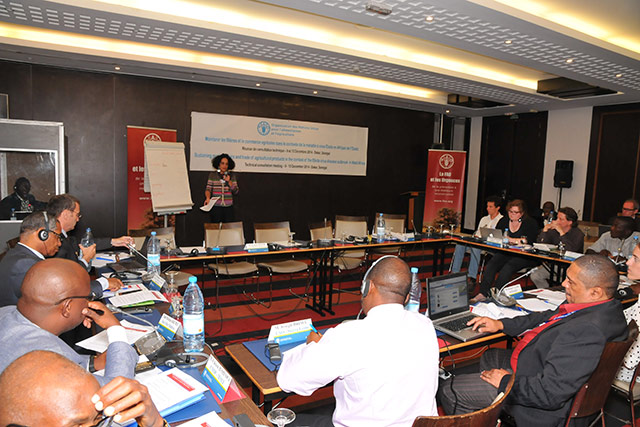 In addition to the health consequences in West Africa, the Ebola virus disease (EVD) outbreak has also led to various economic and social disruptions in affected and neighbouring countries.

The direct impact on the health of farmers in the main agricultural regions, restrictions on the movement of goods and people and the reactions of fear caused by the outbreak have disrupted the market chains of agricultural products, leading to a risk for the food and nutrition security of the populations that depend on it for their food and income. The Food and Agriculture Organization of the United Nations (FAO), with the technical assistance of the CIRAD, organized a meeting of experts in Dakar to discuss agricultural trade in the context of the EVD outbreak on 9 and 10 December 2014.

More than thirty food security and agricultural production specialists spent two days examining these new problems in the region with stakeholders from the agricultural market chains sector and experts in animal health, anthropology, epidemiology, public health and health risks. The obstacles and risks facing the marketing channels of agricultural products such as rice, palm oil and cocoa were analysed using a multidisciplinary approach.

Diagnosis et analysis of the situation

It is not merely the fall in agricultural production and the rise in consumer prices, but also restrictions on the movement of agricultural products and the decrease of households’ purchasing power that threaten nutrition and food security at the regional level.

The experts at the meeting noted that the risk of the disease spreading by agricultural products was extremely low, and the main issue at stake for food security was to remove contamination risks linked to gatherings and travel in order to limit decreases of production and rising food prices. Concrete response options and measures to guarantee the fluidity of trade channels for agricultural products were analyzed, notably organizing trade corridors and the secured re-opening of weekly markets.

“At a crucial time for the next crop year, these measures need to reassure producers about the possibilities of selling their future production. The measures must involve not only traditional healthcare actors but also all the stakeholders from the agricultural sector (farmers associations, transport unions, traders’ unions and market authorities), to co-construct strategies that connect health, farming and food security issues”, explained Vincent Martin, FAO’s Response Coordinator to the Ebola outbreak.

The proposed measures and the concrete means to implement them will be shared with the governments of affected and neighbouring countries, private sector stakeholders and regional structures such as the Mano River Union, the Economic Community Of West African States (ECOWAS), the West African Economic and Monetary Union (WAEMU) and the Permanent Interstate Committee for drought control in the Sahel (CILSS).

For FAO, this meeting represents the first step towards a regional dynamic aiming to guarantee the movement and marketing of agricultural products. These discussions paved the way towards a response geared to the scale of the threat to food security in light of the Ebola outbreak in West Africa.