Home Top News Ten years after the Asian tsunami, the region is better prepared to... 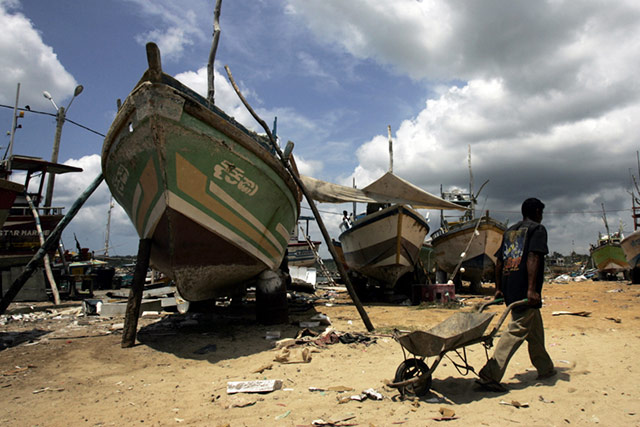 Ten years after the world’s worst natural disaster in living memory roared across the shorelines of South and Southeast Asia, countries are better prepared to deal with tragedies like the Indian Ocean Tsunami, but there is room for improvement the UN’s Food and Agriculture Organization (FAO) announced today.

In December 2004, the tsunami swept away the lives of more than two-hundred thousand people, destroying livelihoods of about 1.4 million of those who survived and damaging crops, livestock, fish ponds, boats, fishing gear and mangroves and thus affecting the whole food production systems.

In many cases, entire fishing communities were obliterated – as was coastal agriculture – the tsunami’s powerful waves smashed fishing boats and even tossed large trawlers far inland, set to rest where animals once grazed and rice and vegetables had grown.

“This week, a decade later, while events marking the remembrance of the tsunami recall the human tragedy, FAO examines the lessons we’ve learned to mitigate the damage to agriculture livelihoods, food security and nutrition from such natural and climatic events, implement proven-practices to reduce risks and recover more quickly when they happen, and acknowledge remaining shortcomings,” said Hiroyuki Konuma, FAO Assistant Director-General and Regional Representative for Asia and the Pacific. “What we and our member countries have learned and now see in place is impressive, but there is still more that can and should be done to prevent and mitigate disasters,” he added.

Asia-Pacific region most vulnerable to natural and climate-induced disasters

During the period 2003 to 2013, in Asia and the Pacific, some 200 million people were affected annually by natural disasters ranging from the tsunami to cyclones, floods and typhoons. During roughly the same period (2001 – 2010), the cost of these disasters for the region averaged US$ 34 billion each year.

While some member countries worst affected by the Indian Ocean Tsunami are now better prepared for disasters before they strike and better positioned to respond after they do, a recent FAO-sponsored workshop with ASEAN members stressed additional actions that are needed to further increase resilience to disasters.

The workshop concluded that the effects of a rapidly increasing population and urbanization, coupled with the effects of eroded natural resources and climate change, mean climate-induced events create the highest risk exposure in the ASEAN region.
Among the recommendations, the workshop called for greater involvement of all sectors of agriculture, livestock, fisheries, aquaculture and forestry – especially key critical productive sectors in which progress must be bold – in pro-active national and regional policy processes for disaster risk reduction and management (DRR/M). A clear financial commitment would be needed to promote capacity development in DRR/M from the various sector’s line agencies.

Improved sector and livelihoods data disaggregation and risk assessments and monitoring should be made a priority. And the workshop urged countries when addressing risk exposure and vulnerabilities of farmers, fishers and forest dependent communities to go beyond natural hazards, considering other threats like environmental and marine ecosystems degradation and the loss of biodiversity among others. The transfer of risk reduction knowledge and technology to local level is required to empower those most vulnerable and most at risk.

Much has been learned – and implemented

Prior to the tsunami, actions by countries were reactive rather than proactive, with a focus on life-saving then recovery. Since then, there has been a paradigm shift toward the equal importance of anticipative, multi-hazard risk reduction with prevention and mitigation of natural disasters given equal importance.

Early disaster warning systems and clearly marked tsunami evacuation routes are evident in some countries such as Thailand which, following the tsunami, established the Department of National Disaster Prevention and Mitigation.
“It’s clear that many countries in the region are now better prepared to reduce the risks and mitigate the damage of natural disasters such as tsunami and typhoons and protect their agriculture and food systems,” said Konuma. “The most recent example is Typhoon Hagupit that struck the Philippines earlier this month where the authorities’ early warnings to farmers and fishers to take pre-emptive action helped ensure that the damage would be far less severe than a year earlier when Typhoon Haiyan ripped through the centre of the country.”

Other countries in the ASEAN region have taken action on disaster risk reduction and disaster risk mitigation. In the Cambodian capital Phnom Penh, flood protection dykes have been built and there is a nationwide early warning system for flooding. In 2010, the Prime Minister of Lao People’s Democratic Republic issued a Decree on the National Strategy on Climate Change. In Viet Nam, a law on Natural Disaster Prevention and Control has been passed and in 2007 a national strategy for natural disaster prevention, response and mitigation was developed.

Like other organizations, FAO was quick to respond to the needs of its affected member countries following the 2004 tsunami. Thanks to the generous contribution of its resource partners, FAO implemented a large emergency and recovery response programme in direct support to the government of Indonesia, Sri Lanka, Thailand, Maldives, Myanmar, Seychelles and Somalia.

FAO’s technical expertise focused on protecting, restoring and enhancing the agriculture-fisheries-based livelihoods of the affected coastal communities. This support primarily targeted the replacement of lost assets while at the same time promoting the wise use of natural resources, helping to avoid restoring the pre-tsunami overfishing capacity in Aceh-Indonesia and in Sri-Lanka, and further depletion of the fish stock.

In the Maldives, FAO worked with local authorities to help islanders recover from salt-water contaminated soil that killed many fruit trees – while fish and coconuts were still available, this loss of fruit was a serious threat to nutrition.

FAO, together with its partners, helped fishers and farmers to rebuild their livelihoods better than before, strengthening both their resilience and the local economies.