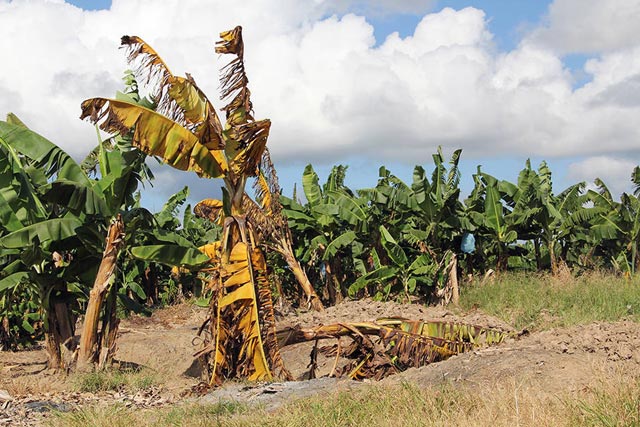 FAO and its partners say that a global effort is needed to prevent the rapid spread of the deadly Fusarium wilt disease in bananas, which poses a severe threat to economic welfare and food security in developing countries.

Plant scientists have been warning for several years that the world’s most popular banana variety, the Cavendish, has fallen victim to a new strain of the fungus causing wilting and mass plant die-offs.

Now FAO and a group of international experts have agreed on the framework for a global program on Fusarium wilt that would work on three main fronts of action: preventing future outbreaks, managing existing cases, and strengthening international collaboration and coordination among institutions, researchers, governments and producers.

Supporting ongoing research, educating producers and assisting governments in developing country-specific policies and regulation for prevention of the disease would be key aspects of the program.

Overall funding needs for the work run in the order of $47 million, FAO estimates. Part of that would be used to provide swift on-the-ground assistance to countries facing new outbreaks.

Tropical Race 4 (TR4) of the Fusarium wilt fungus is considered a top threat to global banana production worth $36-billion, which provides a source of income or food to some 400 million people.

“Fusarium wilt disease has been a major challenge in the history of banana production,” said FAO’s head of Plant Protection, Clayton Campanhola, at a meeting of experts at FAO headquarters last week. “After the devastation TR4 recently caused to bananas in parts of Asia, we have to fear its spread in Africa and the Middle East and also to Latin America, and consider it as a threat to production globally.”

“Bananas are the world’s most consumed and exported fruit,” added Fazil Dusunceli, a plant disease expert with FAO’s Plant Protection Division. “With 85 percent of all bananas being produced for domestic consumption, you can imagine the impact of this disease on food security and livelihoods in developing countries.”