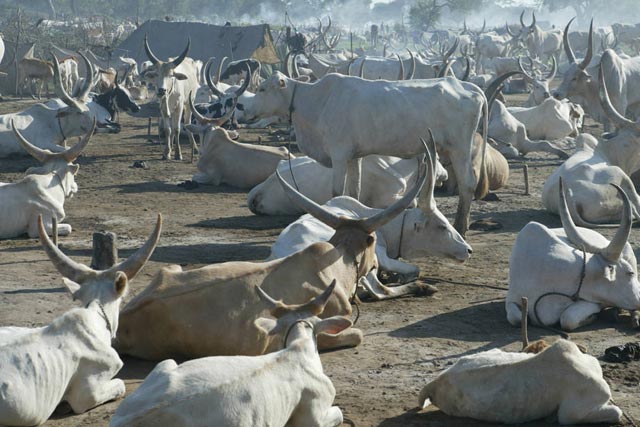 As South Sudan’s livestock owners have fled the ongoing conflict, millions of animals have been displaced, leading to fresh outbreaks of disease and rising tensions between pastoral groups and farmers, as well as within different pastoralist communities.

Livestock play a crucial role in South Sudanese society, representing far more than just an important source of food, usually in the form of milk. Cattle, in particular, are symbols of wealth and status. They are the main asset for herders – sold for cash, bartered for grain, given for dowry and only rarely, for special celebrations or in times of extreme duress, are they slaughtered for meat.

Both herders and farmers face a rising threat of armed conflict. Farmers have cut the amount of land they are planting by as much as 40 percent in areas such as Renk County, and the prices of basic staple foods are as much as four times higher in the most conflict-affected areas, according to a FAO report released in December.

While tribal conflicts and cattle raids are not uncommon in South Sudan, the increased movement of livestock along unusual migratory routes in order to flee or avoid violence, particularly agricultural areas, has created tensions with farming communities, often leading to violence. These dynamics are seriously undermining social stability, including in areas of the country less affected by the wider political conflict that began in December 2013.

As animals have been moved, diseases have spread to previously uninfected areas. Diseases like East Coast Fever, foot-and-mouth disease and trypanosomiasis devastate cattle production and threaten the food security and livelihoods of pastoral communities across the country.

Declines in milk production and the loss of cattle to disease increase the risk of malnutrition, particularly among children and pregnant and breastfeeding women who rely on milk as an essential part of their diet. For most herders, the loss of cattle means the loss of their entire livelihood.

“From the earliest days of the crisis, FAO has done its utmost to draw attention to the silent emergency that these unusual livestock migrations represent”, according to Dr Sue Lautze, FAO Representative to South Sudan.

FAO is scaling up its livestock interventions in the country, focusing on strengthening and decentralizing the cold chain system for livestock vaccines, expanding the community-based animal health network and vaccination programme, deploying its own staff to lead and support disease surveillance efforts, and helping to re-establish local laboratories for livestock disease diagnosis. It is also implementing a new milk voucher scheme for nutritionally at risk families.

FAO promotes a dual-track approach in South Sudan that responds to the immediate needs of crisis-affected populations while increasing food production in less-affected areas.

In 2014, FAO’s humanitarian programme in the country reached over 2.8 million people through a combination of crop production, fisheries and  animal health interventions, including vaccinating over 1.6 million animals. For 2015, FAO is seeking USD 89 million to improve the food security of 2.35 million vulnerable people in South Sudan while further expanding its development efforts.