Home Sport Smith ahead of Horsey at World Invitational 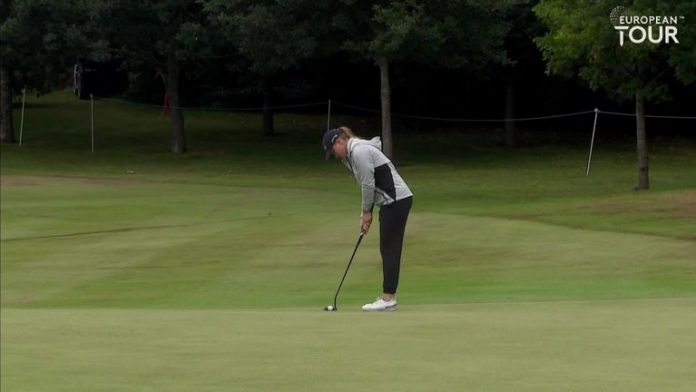 A five-under 65 moved Jordan Smith top of the ISPS Handa World Invitational leaderboard at Galgorm Castle in Northern Ireland – watch the final round live on Sunday from the earlier time of 12.30pm on Sky Sports Golf

A look back at the best of the action from of the ISPS Handa World Invitational in Northern Ireland.

Jordan Smith takes a one-shot lead over David Horsey into the final round of the men’s event at the ISPS Handa World Invitational, while three top the leaderboard in the women’s competition.

Smith carded five birdies in a bogey-free 65 at Galgorm Castle – one of two venues being used in the tri-sanctioned event – to get to 15 under and stay ahead of his playing partner, who closed the gap with a six-under 64.

Halfway leader Daniel Hillier fell three behind despite recovering from a slow start to salvage a level-par 70, while Dutchman Darius van Driel is five off the pace and in a share of fourth with Japan’s Masahiro Kawamura.

“Today we didn’t really do so much at all and the putter saved me quite a few times, so hopefully it can do that tomorrow if needed to,” Smith said. “I’ve been playing well around here for the two days that we’ve been here and I’m feeling good, swing is feeling good, so we’ll see how it goes.”

Smith rolled in an eight-footer at the first and made a two-putt birdie at the next after driving the par-four green, before holing a 20-footer to save par at the third.

The two Englishmen will be out in the final group Sunday 👊#WorldInvitational pic.twitter.com/ImKp4LU16K

The Englishman salvaged another a long-range par at the fifth and followed a 12-foot birdie at the ninth by converting from a similar distance at the 13th, with a birdie at the par-five last closing his second bogey-free round of the week at Galgorm Castle.

Horsey made his charge up the leaderboard when he nailed a 30-footer at the seventh and added three birdies in a four-hole stretch from the 10th, with the Englishman holing from the fringe at the 15th and taking advantage of the par-five last to get within one of the lead.

Overnight pacesetter Hillier three-putted the first, found water with his approach into the third and failed to get up and down from the sand at the fifth, dropping him to three over for the day, only for the New Zealander to bounce back with a hole-out eagle from the 11th fairway and a birdie at the 16th.

Only the top 35 and ties progress through to the final round in both events, with Andy Sullivan – the highest-ranked player in the field – among those to miss out in the men’s competition and Bronte Law missing the cut in the women’s tournament after a second successive 75.

Thailand’s Pajaree Anannarukarn posted five consecutive birdies around the turn on her way to a seven-under 66, jumping in her to a three-way tie for the lead on 13 under alongside American duo Jennifer Kupcho and Emma Talley.

Kupcho birdied her final two holes to sign for a third-round 70 and Talley – the overnight leader – had to settle for a level-par 73, while Korean Chella Choi sits a shot off the pace in fourth.

Who will win the ISPS Handa World Invitational? Watch the final round live on Sunday from 12.30pm on Sky Sports Golf.

Raducanu back in Bromley but what’s next for the teen prodigy?

France suspends thousands of health workers after they fail to get...

Searching for missing persons in connection with 1990s and August 2008...

FAO in the Syrian Arab Republic to host a Zoominar on...