Home Top News Ebola: In Guinea priority given to measuring food and nutritional risks and... 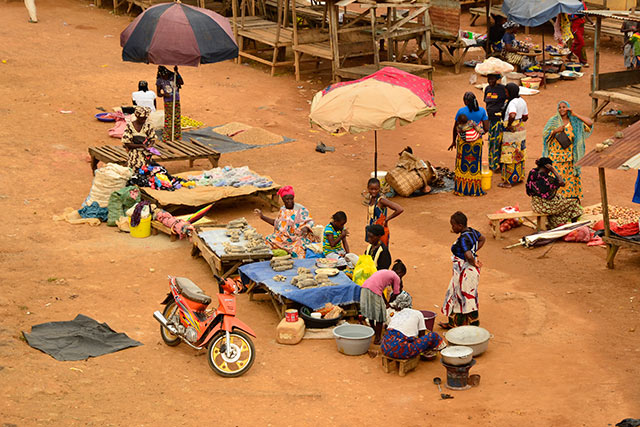 Since the outbreak of Ebola virus disease (EVD) was declared in Guinea in March 2014, the Food and Agriculture Organization of the United Nations (FAO) has been committed to providing the country’s authorities with support to implement the national response plan in coordination with United Nations system partners including the United Nations Mission for Ebola Emergency Response (UNMEER). The prime objective for everyone is to stop the disease from spreading and to save lives.

For FAO, this involves vast prevention operations on the ground to train, raise awareness and educate rural development agents, transport and distribute prevention kits and rapidly assess the epidemic’s impact on agriculture and food security.

The EVD outbreak imposes serious constraints on agriculture and food security in Guinea’s affected areas. In some regions, the epidemic has considerably reduced households’ capacity to produce their food and limited the distribution and marketing chains of agricultural produce because of the restrictions on movements.

In October 2014, FAO, the World Food Programme (WFP) and the Ministry of Agriculture jointly undertook a rapid assessment of EVD’s impact on agriculture and food security to enable them to measure the consequences of the epidemic on agricultural production, prices, markets, trade and stocks.

In parallel to this assessment, an FAO multidisciplinary mission (comprising an agro-economist, a veterinarian and an anthropologist) visited the field from 5 to 17 November 2014 to complete the preliminary findings with group interviews and discussions about perceptions of the risk of the disease. The aim of the mission was also to better understand the impact of the ban on selling and eating bush meat on the food and nutrition security of the affected populations. In Guinea’s forests, bush meat from hunting wild animals constitutes a major source of animal protein as well as a source of income.

The mission highlighted the implementation of adaptation strategies to withstand the loss of income caused by the ban on selling bush meat and the seizures that went with it. Some women who usually make a living from trading meat have been able to convert to selling other products such as dried fish, or market gardening.

“These observations will give us a better understanding of the intervention measures we can set up for agriculture, adapted to the local context and necessary to minimize the disease’s impact on food and nutrition security”, Martin Vincent, FAO’s Regional Response Coordinator to the Ebola outbreak. In particular, they should enable us to offer support to develop income-generating activities such as market gardening or selling dried fish, etc. as an alternative to selling bush meat. They could also encourage the development and strengthening of existing domestic animal production industries.

The aim of this mission was also to measure the impact of social mobilization activities carried out by FAO-trained rural development agents. In December 2014, more than 27 500 farmers, hunters and livestock farmers have been sensitized to preventive measures against Ebola in Guinea thanks to an awareness-raising campaign led by 90 agents from the Ministries for Livestock, Agriculture, Water and Forestry/Environment and Trade. These agents had been previously trained to communication and Ebola prevention techniques with FAO support. These activities are carried out in collaboration with the National Ebola Coordination Unit and its partners, especially for the definition and use of prevention messages.

For Isaias Angue Obama, FAO Representative in Guinea, “Some findings from this mission could also enable us to refine awareness messages, working closely with the Communication Commission of the National Ebola Coordination Unit, if appropriate. Our absolute priority is to support our partners’ efforts in the fight against the Ebola virus”.