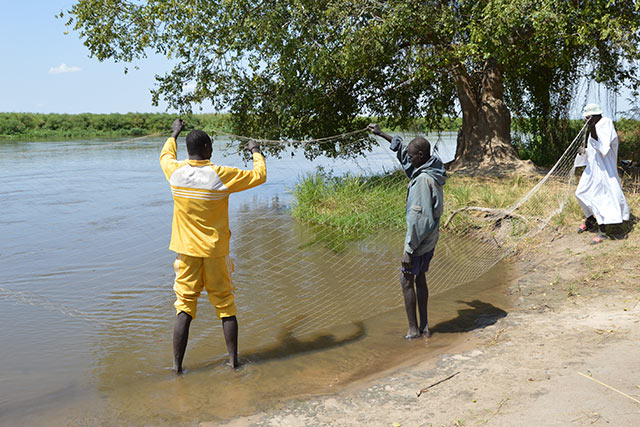 Palek Island is a tiny village located about an hour off the western bank of the Nile near Terekeka county in Central Equatoria State. Not many outsiders have been here, but with support from its partner Ser-Num Fisheries Cooperative Society, FAO was able to provide fishing kits to families on the island in May 2014. For the people of Palek, fish is the most important part of their daily diet, which also consists of groundnuts and maize. Fish are estimated to make up well over 80 percent of the daily diet of populations living along rivers and swamps, including displaced populations who have settled in riverine locations since the onset of the crisis in South Sudan. In an effort to increase production, availability and access to food sources in states less affected by the crisis, FAO and partners distributed fishing kits for 8 000 beneficiaries in 11 locations surrounding Terekeka – an area with plentiful fish  resources and home to over 70 different fishing groups. 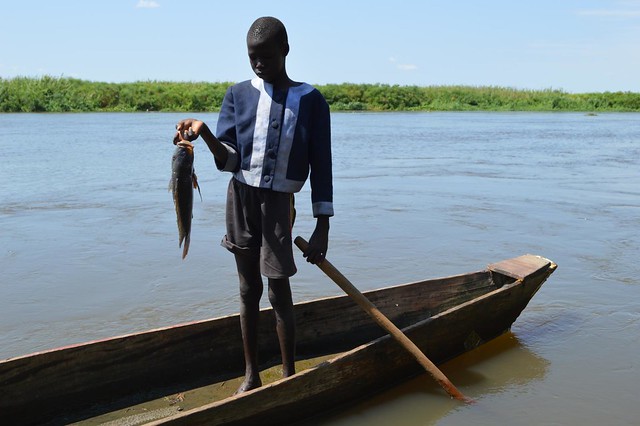 During a focus group discussion, Paulino Lkwach Wani, head of Palek’s fishermen told FAO that although the challenges for fishers remain great, such as a lack of boat transportation, their food consumption has increased since receiving FAO’s fishing kits. “We share the nets and fish to feed our community. Then we are able to buy products in town like salt.”  Fisherman Albino Nambo added, “Now we can buy many more cattle instead of depending on traditional methods (such as cattle raiding or dowries); it is helping our communities with peace.”

In October, FAO and partners trained 92 people in Terekeka on “Post-harvest fish loss reduction”. An estimated 30–40 percent of all fish catch in South Sudan is lost due to poor post-harvest handling and processing. Thirty-four women participated in the training, many being trained in fisheries for the first time. Joyce Garini, Chair of the Terekeka Women’s Association, expressed her enthusiasm, “At first women were excluded from the fishing industry, FAO has empowered us so women are included.” Joseph Banga the Secretary of Fishery Cooperatives spoke of the importance of women’s role in fisheries. “Women are already participating a lot, men bring their fish to women for their financial skills and women are selling fish to other women in the markets.”

Fishing is not only bringing food to the tables in Terekeka, fish has become a foundation for investment and peace. Paul Madeng, Chairperson of Lore Fisheries Cooperatives, spoke on behalf of his fellow fisherfolk by quoting a traditional Mundari tribe proverb, “A person who gives you a hook, is better than a person who gives you food. This is what we thank FAO for.”