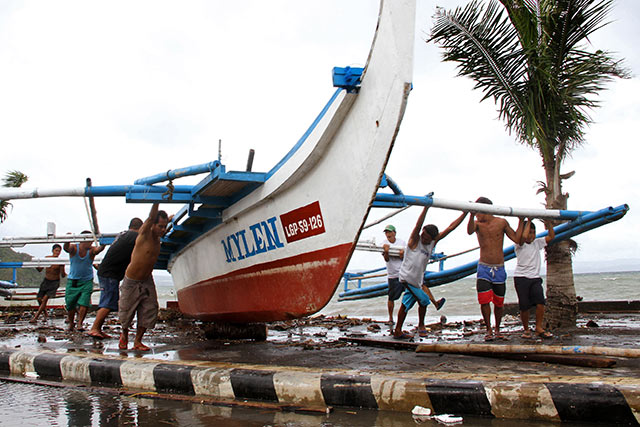 Philippine farmers and fishers have felt the full force of typhoon Hagupit (locally known as Ruby) which has now swept through seven regions of the country, including the Visayas and Mimaropa areas that were severely affected by Typhoon Haiyan 12 months ago.

FAO-Representative in the Philippines, José Luis Fernandez praised the Government for its quick and timely early warnings and response to Hagupit, which included relocating livestock, pre-positioning seed stocks and advising farmers to harvest their crops in advance to safeguard agricultural livelihoods.

In addition, the Government issued warnings to fisherfolks to refrain from fishing and to ensure the safe keeping of their bancas (boats) and other fishing equipment. Latest government figures estimate a total of 55,850 hectares of damage and a production loss of 56,090 metric tonnes (rice, corn and high value crops) in the affected regions of Bicol and Eastern and Western Visayas.

“Initial reports indicate that Typhoon Hagupit has thankfully been far less devastating than Haiyan for the agricultural sector,” said Fernandez.

While the full extent of the damage is still being assessed, FAO remains concerned for populations such as upland farmers and indigenous peoples who often live in fragile and vulnerable ecosystems and which are highly susceptible to heavy rain, flooding and potential mudslides.

“Many farmers are still living in temporary housing and have now been exposed to extreme weather conditions and water entering their homes, which means their stored harvest and seed stock are at risk of being damaged or destroyed,” Fernandez said. “With approximately 70 percent of families in the affected regions either directly or indirectly dependent on agriculture and fisheries for their livelihoods, Hagupit could impact the recovery of Haiyan-affected farmers and fishers,” he added.

FAO-Philippines established seven field offices following Typhoon Haiyan with over 100 staff on standby to deploy to affected areas to assist the government and partners as needed.

FAO works closely with the Government, particularly with the Department of Agriculture (DA), coordinating both at national and regional levels, and has informed them of FAO’s readiness to provide assistance in damage, loss and needs assessments, and of the technical expertise available in the field to respond.

FAO will be supporting DA led assessments in Eastern Samar and Northern Samar and is geared to support assessments in other affected areas. Based on existing networks and suppliers, FAO stands ready to implement fast-track mechanisms for the procurement of seeds, tools and fertilizers if required.