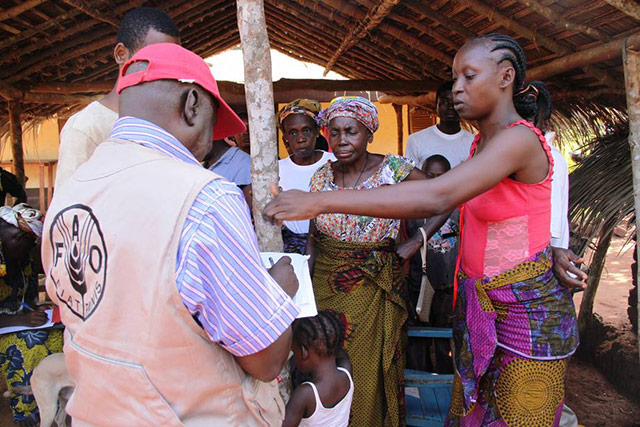 Widespread looting and insecurity in the Central African Republic have taken a heavy toll on crops, livestock and fishing and is eroding the capacity of people across the country to secure sufficient food, a new assessment by the UN food and agriculture agencies has found.

The report by the Food and Agriculture Organization of the United Nations (FAO) and the World Food Programme (WFP) found significant declines in agricultural production in the wake of the crisis in CAR that caused massive displacements and drove hundreds of thousands of people fleeing across its borders.

Production of the main staple cereals and cassava in 2014 (in cereal equivalent) is estimated at about 763 000 metric tonnes, according to the Crop and Food Security Assessment Mission (CFSAM) report – eleven percent higher than the poor 2013 harvest but still 58 percent lower than the 2008-2012 pre-crisis average. The country’s agricultural sector contracted by 46 percent in 2013, it says. (Full report in French/ highlights in English)

Negative impacts on food production were tempered by FAO’s support to around 111 750 households through the provision of seeds and tools ahead of planting to support crop production, accompanied by WFP’s delivery of seed protection rations to limit the risk of planting material consumption.

“While these efforts prevented the food and farming situation from becoming even more desperate, we need additional support to boost food production and the agricultural sector, which is the primary means of survival for many people and the backbone of the Central African Republic’s economy,” said FAO Country Representative Jean-Alexandre Scaglia.

Compared to pre-crisis levels, livestock numbers are estimated to be down by as much as 77 percent, due to frequent raids and cattle-rustling, while the fish supply declined by about 40 percent, owing to insecurity in fishing areas along the country’s rivers and the loss of fishing equipment.

Food reserves in rural areas are now around 40-50 percent lower than average levels, following recurring raids. Families who have lost most of their productive assets and income due to the crisis are now forced to find other ways to acquire sufficient food for their families. Furthermore, disruptions to trade resulting from unsafe roads have led to severe shortages of essential food items, prompting price surges in many areas.

As income sources have dried up, households have now switched to other activities to get by, such as gathering and selling wood and charcoal. The FAO/WFP assessment found that many families are skipping meals and reducing portions.

“WFP is particularly concerned about the situation of internally displaced people (IDPs) and isolated communities. Field surveys show about half of these households have critically low levels of food consumption and are at high risk of malnutrition and therefore rely largely on food assistance,” said WFP’s chief economist, Arif Husain.

In Bangui, the country’s capital, inflation rose to 12 percent in August 2014 from 3.5 percent in January, eroding the purchasing power of families. Prices of staple foods increased by 30-70 percent from March to August 2014. Between a quarter and a third of the people in the Central African Republic were already food-insecure prior to the crisis, struggling to access adequate food on a regular basis.

The FAO/WFP assessment was undertaken with the strong support of local institutions and several national and international NGOs’members of the food security cluster.