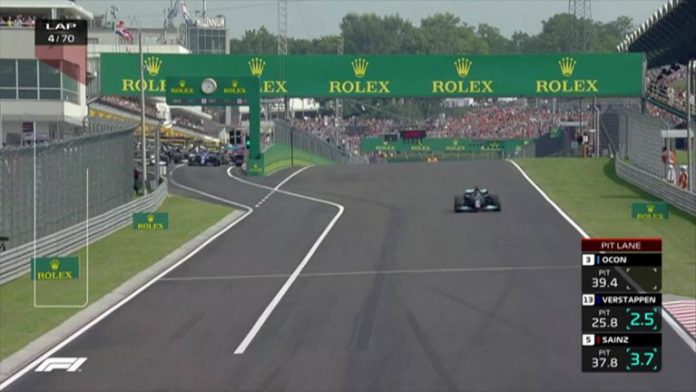 Toto Wolff and Lewis Hamilton on the no pit-stop decision that left the world champion lining up on the grid for a race restart alone, and which then sent him to the back of the field before recovering to third

Mercedes boss Toto Wolff insists his team “did absolutely the right thing” when opting not to pit Lewis Hamilton after the early Hungarian GP red flag, despite the costly consequences of his bizarre solo start.

Following the wet first-lap carnage and subsequent red flag, Hamilton was, incredibly, the only driver on the grid for the race restart after all 14 drivers behind him dove into the pits to fit slick tyres on a rapidly drying track, while the seven-time world champion remained on intermediates.

Hamilton pitted at the end of his opening lap to change tyres, but the delay dropped him to the very back of the field and with a big comeback mission on his hands.

To his credit, he still managed to recover to third place come the chequered flag, taking the title lead off Max Verstappen.

Hamilton said after the race that he had told Mercedes of the dry track conditions ahead of the race restart and that he was surprised by their decision – but Wolff lent his full backing to his team’s strategy call.

“To be honest I think we did absolutely the right thing,” Wolff told Sky Sports F1. “There is no one in the team who would have done otherwise.”

He then explained: “As a leading car, it’s always difficult to take the decision and if you are the only one pitting then you come out last, and there is the difficulty of getting out of the pit-stand because everybody’s pitting.

“With the sun [the track] dried out so quickly that within a lap actually it was dry. These things can happen, and I stand absolutely behind the decision to stay out and that’s why I’m fine.

“I think we could have gambled as a leading car and come in with also a disastrous outcome, and then if that would happen then people would have said we had done a mistake. So that was the right decision.

“How it looked like, we were a little bit lonely there on the grid and obviously that played against us.”

With Mercedes driver Valtteri Bottas having taken out Hamilton’s main rivals Verstappen and Perez on the first lap, Wolff conceded: “At the end of the day it is with karma… maybe we shouldn’t have taken full points today.”

Speaking in parc ferme after the race, Hamilton admitted he thought Mercedes “had other information” when he was told he would be staying out on track – hinting that the team believed more rain could be on the way.

Afterwards, he said he didn’t understand the decision and that it was a “mistake”.

“I know that we can pit…” he said in the press conference. “Obviously we all started on the inters and then through the formation lap I was giving the team information, and it was dry in all the corners.

“I kept telling them it’s dry, dry, dry and they said stay out, so I don’t really understand.

“Definitely a mistake from us all but we win and lose as a team and we bear the burden of the mistake together and we just keep fighting.”

But Hamilton also praised Mercedes’ subsequent decisions, which included a vital undercut to get him ahead of Verstappen.

“This team did an amazing job with the strategy, with the pitstops, and I just had to make it work out there,” he said.