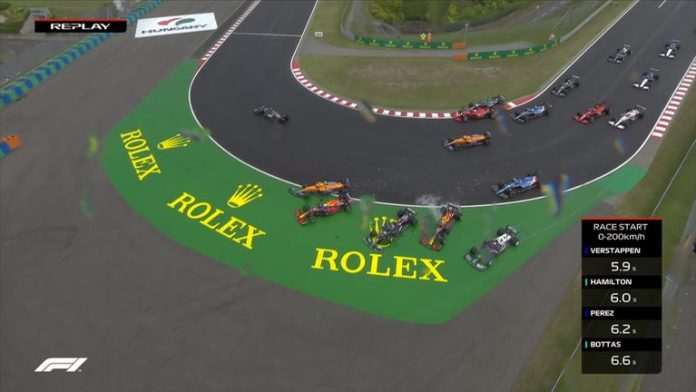 “Again taken out by a Mercedes, so that’s not what you want,” says annoyed Max Verstappen, who lost F1 title lead after picking up big car damage and struggling to 10th-place finish following the first-corner melee in Budapest

Watch the first lap of the Hungarian GP as multiple cars collided, resulting in a red flag

Max Verstappen and Red Bull expressed their frustration after the Valtteri Bottas-triggered carnage at the start of Sunday’s race wrecked their Hungarian Grand Prix.

Verstappen and team-mate Sergio Perez’s cars sustained major damage after Bottas misjudged his braking into the race’s first corner amid drizzling wet conditions. The Mercedes first slammed into the back of a luckless Lando Norris, with the impact shunting the McLaren into the side of Verstappen.

Perez was then also hit by Bottas and immediately retired.

Although Verstappen was able to continue after repairs to his car under the subsequent red flag, he had dropped down the order and his RB16B remained badly damaged. He struggled for pace thereafter en route to a single point in 10th place.

With Lewis Hamilton finishing third, Verstappen lost the title lead to his Mercedes rival for the first time since May heading into the sport’s summer break.

“Again taken out by a Mercedes, so that’s not what you want,” said Verstappen, in reference to the events of Silverstone two weeks ago when Hamilton was found prominently at fault for causing a collision which saw him crash out heavily.

“From then onwards I was missing the whole side of my car, the whole bargeboard area. The floor was damaged as well. It was almost impossible to drive, to be honest.

“I still tried my very best and I scored one point. So it’s at least something but of course not what you want.”

Team boss Christian Horner told Sky F1: “Valtteri obviously made a bad start, it looks like he misjudged his braking point for the first corner, sort of a karting error where you try to take too much back, and unfortunately the result for us he eliminated both of our cars.

“The damage, the cost of the damage, it looks like an engine on Sergio’s car. For Max there just wasn’t the ability… the mechanics worked wonders to get that car even running, the temperatures were off the scale where they have had to straighten pipes out.”

With Bottas holding his hands up for inadvertently causing the accident and chain reaction in his interviews after the race, his Mercedes team boss Toto Wolff said of Verstappen’s frustration: “I completely understand the feelings.

“All I can do is to take it on us. It was a small mistake being too on the brakes and took out Lando and the two Red Bulls. It’s not how things should go but in the rain, it can be quite tricky.

Wolff added: “It’s a small mistake that caused such a big accident costing them a lot of points and possibly two cars on the podium. So sorry for that.”

Joining the Sky F1 stage for his post-race interview immediately after Wolff, Horner quipped amid the frustration: “Is he going to pay the bill?”