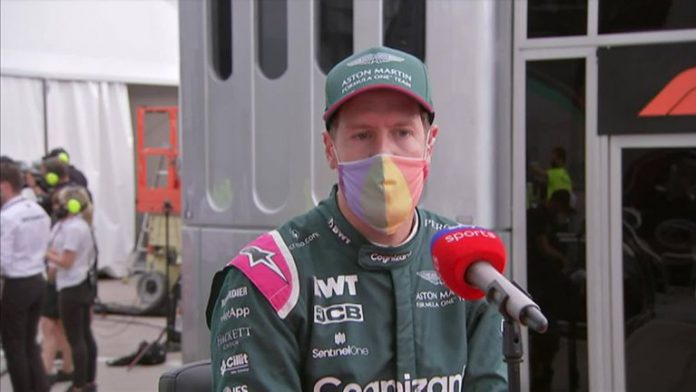 Sebastian Vettel has been disqualified from the Hungarian GP for a fuel rules breach after the race, losing his second place for Aston Martin.

The news – confirmed more than six hours after Vettel finished the race behind surprise winner Esteban Ocon – finalises the result and lifts new championship leader Lewis Hamilton up to second, and Carlos Sainz into third.

Four-time F1 champion Vettel had driven superbly on Sunday, narrowly missing out on the win on a chaotic afternoon, before taking his second runner-up berth of the season.

However, he was penalised on Sunday evening after his car was found to have contained insufficient fuel at the end of the race.

F1 regulations state that “competitors must ensure that a 1.0 litre sample of fuel may be taken at any time during the event” – and only an insufficient 300ml could be removed from Vettel’s Aston Martin in Budapest.

Vettel did not finish his cool-down lap after the chequered flag, returning to the pits for the post-race celebrations on foot.

What did the stewards say?

The stewards’ report read: “After the race it was not possible to take a 1.0 litre sample of fuel from car 5.

“The team was given several opportunities to attempt to remove the required amount of fuel from the tank, however it was only possible to pump 0.3 litres out.

Karun Chandhok takes a closer look at the scenes from the first lap of the Hungarian Grand Prix.

“This figure is calculated using the FFM or injector model. Given this situation, car No. 5 is not in compliance with the requirements of Art. 6.6 FIA technical regulations.

“According to Art. 6.6.2 competitors must ensure that a 1.0-litre sample of fuel may be taken from the car at any time.

“The procedure was followed however the 1.0-litre sample of fuel was unable to be taken.

“The stewards determine to apply the standard penalty for technical infringements. Therefore they took into account, that it shall be no defence to claim that no performance advantage was obtained.”

What Vettel’s DSQ means for race result and championship

Vettel’s disqualification moves the other 13 drivers who finished all up a place. Notable risers apart from the new podium-sitters are Fernando Alonso to fourth, and Williams’ Nicholas Latifi and George Russell in seventh and eighth.

And the stewards’ decision also has ramifications for the championship.

Hamilton’s title lead rises from six points to eight due to his second-place finish, even though Max Verstappen also rose a place in the final results from 10th to ninth.

Aston Martin, meanwhile, drop to seventh below AlphaTauri in the team standings.