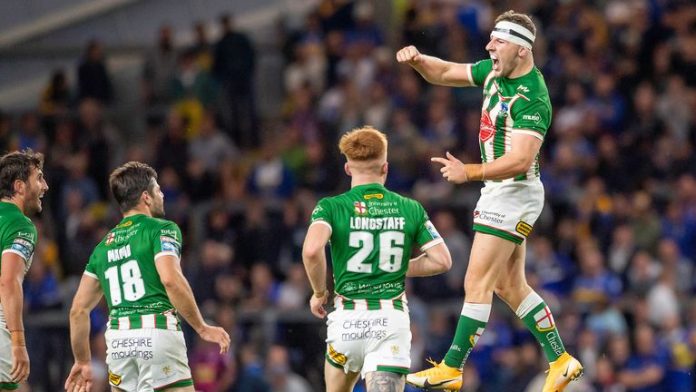 George Williams enjoyed a victorious debut for Warrington by kicking a dramatic last-minute drop-goal which condemned Leeds to a 27-26 defeat.

A thrilling encounter saw both sides score four tries apiece and Harry Newman’s brace for the Rhinos appeared to have handed them victory.

But the Wolves’ replacement hooker Danny Walker scored a late try which Stefan Ratchford converted to level matters at 26-26 before Williams’ one-pointer snatched the win for Steve Price’s team.

Warrington, who had beaten Wigan at home on Wednesday, paired England stand-off Williams in the halves with Blake Austin but Leeds began the brighter of the sides.

The Rhinos had won at Hull FC on Thursday and led in the eighth minute when Luke Gale found Richie Myler inside the left channel and the full-back’s neat pass sent Newman diving over in the corner.

It was a well-worked try which Rhyse Martin converted, but Warrington quickly steadied themselves and fashioned an impressive response.

After Leeds forward Zane Tetevano lost possession from the restart, the visitors forced the Rhinos back towards their own line.

Ratchford added the conversion but the hosts added a second try in the 17th minute when Mikolaj Oledzki showed impressive strength to barrel over the line.

Martin again converted to make it 12-6 but Leeds faltered again from the restart as Tetevano fumbled the ball from the kick-off, forcing his side into a goal-line drop-out.

From there, Warrington attacked again and, although Williams’ pass went to ground, Austin scooped up the ball and scampered over the line.

Ratchford converted again to level matters at 12-12 but Leeds claimed a third try in the 29th minute through ex-Warrington hooker Brad Dwyer.

Gale expertly created the space to sidestep his way through the Wolves defence before producing a deft offload which sent Dwyer over the line.

Martin’s third conversion put Leeds 18-12 ahead at the break but Warrington scored a controversial equalising try in the 51st minute when Josh Charnley dived over in the right corner.

Warrington’s Josh Charnley crossed the line to level up against Leeds Rhinos, but should the try have stood?

The winger looked like he had been denied but referee Chris Kendall sent it up to video referee Robert Hicks as a try and he confirmed it as a legal score.

Ratchford converted to make it 18-18 and then booted a penalty to put Warrington in front before an equalising penalty from Martin – after Jack Hughes’ late hit on Gale which earned the Warrington captain a yellow card – made it 20-20.

With 10 minutes remaining, Newman brilliantly burst through the Warrington defence for a fine individual score and Martin added the extras.

Yet Warrington were not to be denied as replacement hooker Walker crashed under the posts with four minutes remaining and Ratchford’s conversion made it 26-26.

There was still time for Williams to have the final say as he kept his cool to kick a well-executed drop-goal which gave Warrington a famous win.