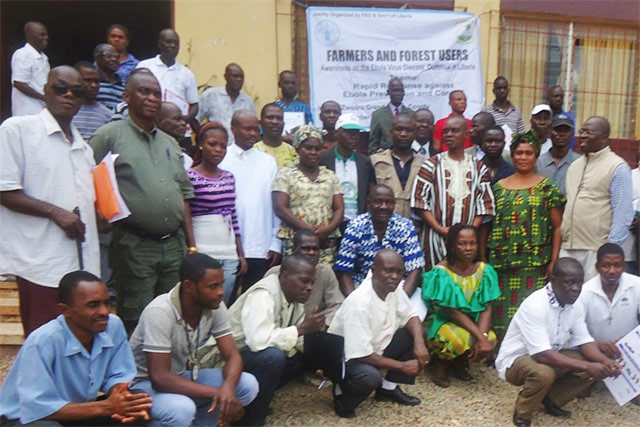 The Government of Liberia through the Forestry Development Authority (FDA), Environmental Protection Agency (EPA), Ministry of Health, Food and Agriculture Organization of the United Nations (FAO) and other key stakeholders have completed a three-day anti-Ebola training geared towards creating awareness and social sensitization in order to stop the current human-to-human transmission of the disease.

The training, held from from 15 to 17 September 2014, aimed at buttressing national efforts in the fight against the Ebola virus disease, particularly focusing on improving the capacities of national stakeholders, in the agriculture sector, at subnational level to vigorously embark on community-to-community and house-to-house social mobilization and anti-Ebola awareness campaigns to stop the human-to-human transmission of the disease. FAO used the occasion to gather first-hand information on how Ebola impact community livelihoods.

In addition to the human toll the virus caused, it poses huge economic challenges nationally. Farmers, marketers, women and youth entrepreneurs and producers see their savings being depleted, production and income being lost. Limited transportation/movement of people and goods triggered price hikes in basic commodities like rice, fuel/gas, charcoal, palm oil and fish.

“Farmers are directly and severely affected by the Ebola crisis as their livelihoods are threatened, farming activities are reduced for the fear of the spread of Ebola. Food production is currently reduced by 15-20 percent, limited transportation means impede export/import of cash crops and other produce. The lack of access to credit/funding to farmers, relevant unions and associations hinders businesses. The lack of bleach, chlorine, buckets, soap, flyers, thermometers and information (Ebola toolkits) is an impediment to rural communities in the fight against the spread of the disease. Ebola-affected communities stressed the lack of alternative livelihoods for farmers and forest users. For example, telling village dwellers not to eat bush meat when fish or other alternatives are not available poses problem,” participants said.

The 120 participants committed themselves to mentoring 20 persons each who will be used to carry the anti-Ebola campaign community-to-community and door-to-door. The campaigners will be pulled from within their own communities of residence. FAO and the Ministry of Agriculture are working assiduously to step up the Ebola awareness campaign to high-risk and hard-hit communities and, at the same time, improve livelihoods using women associations, farmers’ networks, youth groups and civil society organizations.

The three day anti-Ebola training was coordinated by Hon. Jeremiah Garwo Sokan, Sr. National Coordinator FAO/Technical Cooperation Programme Ebola Response Project. The local authority in each hosting counties and cities graced the official opening of the training. The development superintendents of Grand Gedeh and Bong counties and the Hon. Representative of district four in Margibi county graced the occasion held in Zwedru, Gbarnga and Kakata respectively.