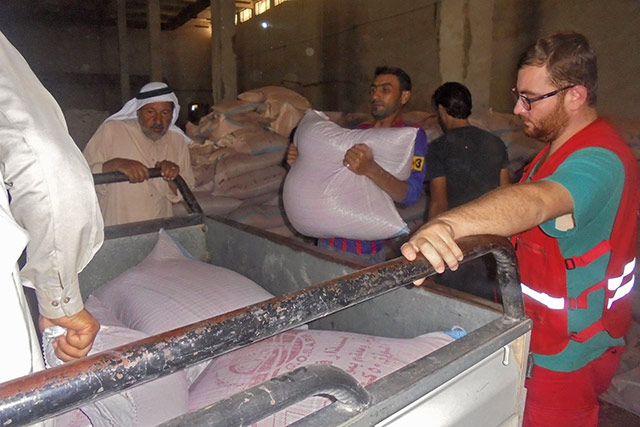 FAO is distributing over 1 100 tonnes of wheat and barley seeds in Ar-Raqqa governorate to meet the needs of nearly 4 500 small-scale farmers for the autumn/winter planting season, which began in October.

The assistance, funded by the United Kingdom’s Department for International Development (DFID), will enable farmers to cultivate a total of nearly 4 500 hectares and harvest more than 9 800 tonnes of cereals. This will help farming families restore their livelihoods and improve their food and nutrition security.

The distribution is ongoing with the support of the Syrian Arab Red Crescent, a FAO partner organization, and will reach seven locations in Ar-Raqqa governorate: Raqqa center, Beer Al Hashm, Al Karama, Khas Ejeil, Maadan, Al Sabkha and Al Mansoura. Despite the fragile security situation in Ar-Raqqa governorate, activities began mid-September and are progressing well, allowing farmers to plant in time for this season. To date, 2 500 households have received cereal seeds.

Ar-Raqqa governorate is part of the so called “cereal belt” of Syria (including also Aleppo, Al-Hassakeh, Deir-Ez-Zor, Hama and Idleb governorates), which produces more than 80 percent of wheat nationwide. Agriculture-based livelihoods in Ar-Raqqa and other parts of Syria face severe constraints across the value chain, affecting farmers’ food security and coping strategies.