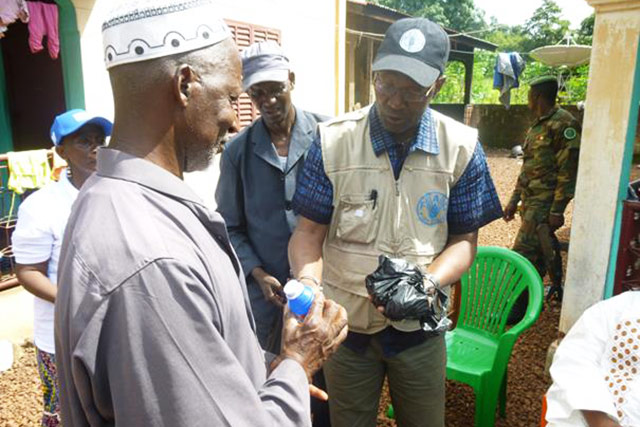 As part of the national programme for the fight against the Ebola virus disease, and in line with other technical and financial partners, FAO has developed and financed a technical cooperation project aimed at strengthening the role of the Ministries of Livestock and Animal Production in the fight against Ebola.

In view of the situation on the ground, special attention is being given to communication, information and social mobilization within the rural communities of the Ebola-affected districts of Guinea. Consequently, several Information – Education – Communication training workshops are being organized in seven districts from 6 to 17 October 2014.

Rural development and extension field agents are generally involved in animal and crop production, environmental management and trading activities undertaken by the rural populations.  Field agents work in close relationship with the local communities and therefore their contribution to the information and sensitization programme is crucial.

FAO has developed a training programme on social mobilization techniques to enhance the capacities and efficiency of these agents. The training aims to provide a better understanding of the disease and the necessary preventive measures. In partnership with UNICEF and within the framework of the national communication plan, the programme will first develop training material to better inform vulnerable populations (hunters, farmers, etc.). Once trained, field agents will undertake awareness activities combined with the distribution of kits within the communities for a period of three months.

The expected results include:

Guinea is a country with a strong pastoralist tradition and is endowed with enormous natural potentials, thanks to the diversity of its agro-ecological conditions. Animal production is the second most important activity after crop production and involves about 30 percent of the rural population. Yet in spite of these potentials, the nutritional needs of the population in terms of animal proteins are far from being met. Added to this nutritional deficit is the Ebola virus disease epidemic which has been affecting the country for several months now, worsening the plight and living conditions of the already fragile rural communities.