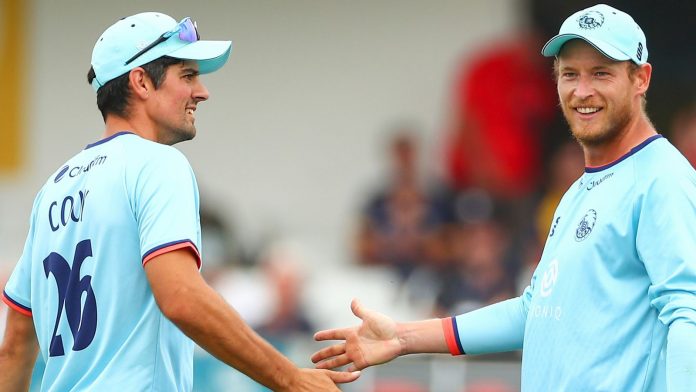 Sir Alastair Cook and Tom Westley put on an eye-catching partnership of 127 to help Essex to a massive nine-wicket win against Kent at Chelmsford in the Royal London One-Day Cup.

Eagles skipper Westley hit 69 off 77 – his third half-century of the competition – while former England captain Cook stroked a comfortable 77, both finishing not out as they chased down the modest target of 159 with almost 19 overs remaining.

Only George Munsey’s defiant 39 helped give the visitors’ total a veneer of respectability, although their numbers were heavily depleted due to several injuries and The Hundred tournament. Essex v Kent scorecard

Essex returned to winning ways to improve their chances of moving into the knockouts, while Kent are still without a win.

Nottinghamshire eased past Leicestershire with a seven-wicket victory, passing their target of 145 after just 20 overs and two balls at Welbeck Cricket Club. Notts vs Leics scorecard

Luke Fletcher (4-30) bowled well to restrict Leicestershire to 144, with good support from Dane Paterson (3-25) and Brett Hutton (2-22) helping bowl the visitors out despite a strong 35 from 16-year-old all-rounder Rehan Ahmed.

Luke Wells’ classy 66 not out inspired Lancashire to a 51-run win against Hampshire via the Duckworth-Lewis-Stern method at the Ageas Bowl in Southampton. Hants vs Lancashire scorecard

Hampshire’s best performers with the bat – the only two to pass 17 – were Nick Gubbins with 31 and wicketkeeper Lewis McManus with 45, with seamer and captain Tom Bailey’s 3-23 off 10 overs a particular standout for the visitors, who kept Hampshire to 162 all out.

We remain unbeaten in the @RoyalLondonCup with a 51-run (DLS) victory over Hampshire! @luke_wells07 unbeaten with a List A career best 66*

Former England opener Keaton Jennings hit a methodical 18 before left-hander Wells hit 12 fours in a List A personal best innings to anchor the side home, calmly supported by Rob Jones (24) in a third-wicket stand of 71 off 13 overs.

The rain intensified just after 4.30pm BST, preventing any further play, with Lancashire well ahead on DLS.

Stevie Eskinazi’s best List A score of 130 from 101 balls helped Middlesex register their first win of the season as they beat Worcestershire by 13 runs.

Eskinazi returned to action after recovering from a groin injury and marked his first appearance of the summer in the One-Day Cup by racing to three figures off just 83 balls as Middlesex made 302-5 in a game reduced to 41 overs per side. Worcs v Middlesex scorecard

Brett D’Oliveira then continued his fine form with a top score of 74 for the previously unbeaten Rapids, while Tom Fell and Jake Libby hit 58 apiece, but Middlesex always just held the edge and the Rapids closed on 289-7.

🙌 | BOUNDARY WATCH
Stephen Eskinazi has treated us to some exceptional shots on this Sunday afternoon!

James Hildreth blasted a brilliant 61 off 34 balls as Somerset continued their strong defence of the tournament with a five-wicket victory over Yorkshire at Taunton. Somerset v Yorkshire scorecard

In a game reduced to 20 overs per side by rain, Yorkshire ran up 158-5, with Matthew Revis leading the way with his best List A score of 58 not out.

Fellow teenager Will Luxton contributed an unbeaten 31 to an unbroken sixth-wicket stand of 69, while left-arm spinner Lewis Goldsworthy was the pick of the Somerset attack with 1-17

In reply, the hosts reached 159-5 with five balls to spare, with Hildreth’s sparkling knock including five fours and four sixes.

Sussex – who are now winless in five games – had a chance of an astonishing victory as they rallied from 141-8 to 203-8 chasing 218 in 42 overs thanks to a heroic half-century from wicketkeeper-batsman Oliver Carter (59 off 48 balls).

When Carter – who put on 62 with Archie Lenham for the ninth wicket – was out, 15 runs were still needed but 17-year-old Lenham and last man Henry Crocombe kept Sussex alive, with six needed off two overs.

A brilliant end to a great contest. Congratulations to our opponents, @Gloscricket 👏

Lenham was run out by Tom Lace’s fine throw going for a second run off the fifth ball of the penultimate over, when, if Sussex had settled for one Lenham would have needed to score just four off the last over.

The academy graduate saw the hosts over the line with three balls to spare in their chase for 178 for victory in a game reduced to 28 overs a side following morning rain.

The left-hander’s heroics came after the Steelbacks’ new-ball pairing of Curtley-Jack White (4-20) and Ben Sanderson (3-29) had reducing Derbyshire to 8-4 before Fynn Hudson-Prentice’s swashbuckling 64 off 43 balls gave the still winless visitors something to defend.