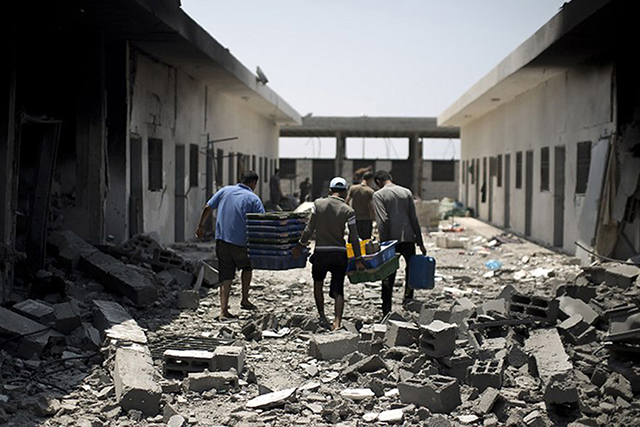 The fighting in Gaza has forced farmers and herders to abandon their lands and has paralysed fishing activities, bringing local food production to a halt and severely affecting livelihoods, FAO warned today. Recovery in the agriculture sector, once hostilities cease, will require significant external assistance over the long term.

The recent fighting has resulted in substantial direct damage to Gaza’s 17,000 hectares of croplands as well as much of its agricultural infrastructure, including greenhouses, irrigation systems, animal farms, fodder stocks and fishing boats.

According to the latest update by the FAO/World Food Programme (WFP)-coordinated Food Security Sector (FSS), Gaza has lost half of its population of poultry birds (broilers and layers) either due to direct hits on their shelters or lack of water, feed or care resulting from access restrictions.

Around 64,000 head of small ruminants are in need of animal feed and water in order to avoid further animal deaths and the additional erosion of herders’ productive assets. Meanwhile losses by Gaza’s fishing sector so far are estimated at 234.6 tonnes over the period 9 July – 10 August – equivalent to 9.3 percent of local fishers’ yearly catch.

“Up to now, ongoing military operations have prevented detailed assessments of damages to agriculture from being completed,” said Ciro Fiorillo, head of FAO’s office in the West Bank and Gaza Strip. “With the latest ceasefire holding, however,  a series of field visits to agriculture sites has been initiated under the leadership of the UN Office for the Coordination of Humanitarian Affairs (OCHA) and with FAO and other FSS partners participating, as part of a broader Multi-Cluster Initial Rapid Assessment (MIRA) process. That activity will continue, security conditions permitting, and will lead to a detailed report on damage to agriculture and recovery needs,” he added.

The Gaza Strip imports most of what it eats — however locally produced food represents an important source of nutritious and affordable food, and some 28,600 households in Gaza rely on farming (19,000 households), livestock raising (6,000) and fishing (3,600) for their livelihoods.

“Under the most recent ceasefire many farmers and herders are now able to access their lands, however resumption of food production faces serious obstacles given the damages sustained and shortages of water, electricity, inputs and financial resources, as well as ongoing uncertainty regarding the possible resumption of military activities”, said Fiorillo.

With local food production halted and food imports curtailed, virtually the entire population of Gaza (about 1.8 million people) is currently reliant on food aid. WFP, together with the UN Relief and Works Agency for Palestine Refugees in the Near East (UNRWA) regularly assists about 1.1 million people. Additionally, about 700 000 people are currently relying on the extraordinary food distribution carried out by the Palestinian Ministry of Social Affairs, UNRWA, and WFP.

As soon as a permanent ceasefire is established FAO, with support from Canada, will distribute fodder to feed 55 000 small ruminants throughout Gaza for 45 days. The Organization is also positioned to distribute 4 000, 1-cubic metre water tanks to help herders water their animals.

“We have a programme that supports the resilience of agriculture-based livelihoods of Gaza fishermen, herders and farmers,” said Abdessalam Ould Ahmed, FAO Regional Representative for the Near East and North Africa. “We need to get this back on track as soon as hostilities cease, to promote not just survival of Gaza’s people but their self-reliant development.”