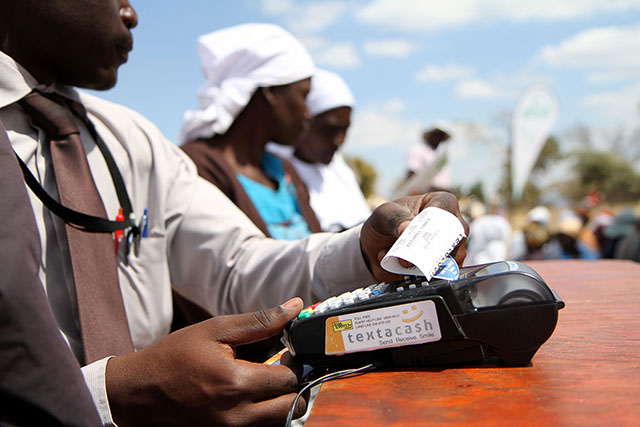 Smallholder farmers in Africa have long borne the brunt of the adverse effects of global climate change. They are perpetually at the mercy of unpredictable weather patterns and fear total losses in the event of drought, as they rarely have alternative plans to fall back on.

Smallholders often suffer the full impact of poor weather on their crops because, unlike commercial farmers, they are unlikely to take out insurance to mitigate such risks.

However, with the implementation of the weather index insurance project by the Food and Agriculture Organization of the United Nations (FAO) working with a private firm – ZimNat Insurance Company – farmers in three districts of Zimbabwe now have the option to cushion themselves against the vagaries of the weather.

With funding from the European Union, the weather index insurance project was piloted during the 2012 – 2013 agriculture season and was continued in the last farming season in Goromonzi, Kariba and Uzumba-Maramba-Pfungwe districts.

“Smallholder farmers’ uptake of agriculture insurance is very low in Zimbabwe and at the same time there is limited investment towards the provision of market based insurance services for this sector”, said Mr David Phiri, FAO Subregional Coordinator for Southern Africa and FAO Representative in Zimbabwe.

As such, this project encourages both the provision and uptake of insurance coverage for smallholder farmers. In the partnership, FAO was responsible for coordinating and supervising project activities while ZimNat raised awareness on insurance coverage and sold premiums to interested farmers.

In Goromonzi District, located just over 50 kilometres from the capital city of Harare, Mrs Anatoria Rusike was one of the 82 farmers who insured her crop against drought during the 2013 – 2014 farming season.

Rainfall data forms the basis of the farmers’ payout; as there was a 24 day dry spell during the last farming season, participating farmers were entitled to a claim payout.

“I received a payout from ZimNat,” said Mrs Rusike. “I joined in December last year after the benefits were explained to me.”

She decided to join because of her experiences in the past few seasons.

“At times we would have a good season, but there were times when we were hit by drought and this affected us as we would not have enough to eat and would struggle to raise adequate money to buy inputs for the following season,” said Mrs Rusike, who is a mother of nine children.

Each farmer contributed half of the premium, with FAO providing the other 50 percent.

“This project has shown us that we can insure our crops and make claims in the event of a loss as a result of long dry spells. I am sure that other farmers who did not join last year will do so this coming season as they lost a lot as a result of the long dry spell we experienced,” said Mrs Rusike.

The smallholder farmers’ payouts were conducted by means of a debit card provided by the Central African Building Society, a financial institution that works with ZimNat. Farmers had the choice of whether to cash out the entire amount insured or keep some savings in the account.

This meant that participating farmers automatically opened bank accounts, a commendable side effect of the project in a country where 40 percent of the population is not banked, according to a 2012 Zimbabwe National Statistics Agency report.

“I am excited that I now have a bank account. I can now receive money through this account. I never thought that I would be able to hold a bank card of my own. I am very happy that this has become a reality, thanks to this project,” said Mrs Rusike.

To increase the reliability of the rainfall data collected and supplement the few existing weather stations, the project also purchased four new automatic weather stations. FAO provided logistical support to ensure the weather stations were installed in ideal locations within the participating districts.