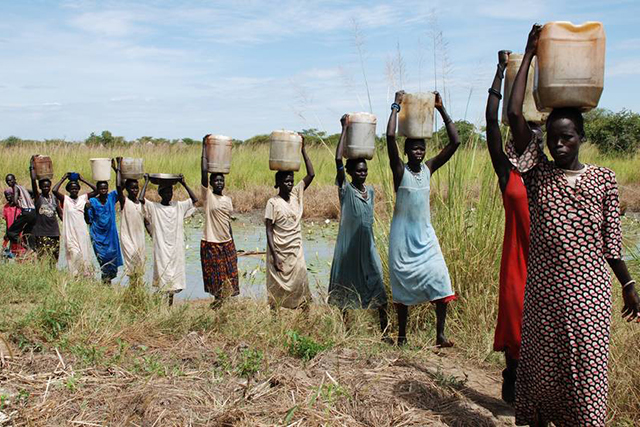 Continued efforts to provide farmers, fishers and pastoralists in South Sudan with life-saving emergency livelihood kits are at risk due to a funding shortfall, aggravating the risk of famine in some areas of the country, FAO warned today.

The Organization has so far received $42 million of the $108 million it has appealed for as part of the revised Crisis Response Plan for 2014. Contributions received to date have been used to reach more than 205,000 vulnerable households – over 1.2 million people – with emergency livelihood kits, which contain crop and vegetable seeds, fishing equipment and livestock treatment kits and vaccines for veterinary support.

FAO is delivering emergency livelihood support at a pace ten times faster than last year. The Organization has delivered, spent or committed all of the funds it has received, and resources have now run out. FAO urgently needs an additional $66 million in order to further expand its support to help the South Sudanese help themselves through the crisis.

“An additional 2 million people, or 345 000 vulnerable households, can be supported if we receive additional funding,” said Jeff Tschirley of FAO’s Emergency and Rehabilitation Division.

“We must not wait for the current very critical situation to deepen or for a famine to be declared because by then we know that it will be too late for many. We need to act today to save lives and livelihoods.”

The FAO Representative in South Sudan and the UN’s Deputy Humanitarian Coordinator in the country, Sue Lautze, underlined the importance of the emergency livelihood kits for the country, where up to 95 percent of the population depends on farming, fishing or herding to meet their food and income needs.

“The distribution of the kits provides the means for fishers to fish, farmers to plant and pastoralists to keep their herds healthy, which in turn puts milk, vegetables, meat and fish on the table, and that’s been keeping a lot of people alive right now,” she said.

In May, some 3.5 million people – almost one in three South Sudanese – were facing crisis or emergency levels of food insecurity, and the number is expected to increase to 3.9 million (34% of the total population)  during June through August 2014.

More than 1.5 million people have fled their homes since conflict broke out in the country in mid-December and the situation has been further exacerbated by the onset of the rainy season in June. Meanwhile, violent clashes continue to be reported in some areas despite the signing of a cessation of hostilities agreement in May.

“The best means to prevent famine in South Sudan is for the guns to fall silent,” said Lautze. “Continued violence is the single most important factor in transforming a risk of famine into a reality.”

FAO has been scaling up its operations in South Sudan since March 2014, working with the World Food Programme and UNICEF to reach some of the most remote communities in the country by transporting emergency livelihood kits via airdrop, airlift and truck.

So far over 329 000 kits have been distributed thanks to support from Belgium, Canada, Denmark, the United Kingdom and the United States of America as well as the Africa Solidarity Trust Fund, the UN’s Common Humanitarian Fund and FAO’s own resources. The composition of the kits and their suitability to the local conditions is essential. FAO is working in close cooperation with logistics partners to ensure that the aid that is delivered can be of immediate support to the population.

Distribution of fuel efficient stoves will begin in the coming weeks, aiming to reduce the risk of sexual violence against women while collecting firewood in remote areas and combat the risk of deforestation.

“Camps have sprung up in the middle of nowhere and women are taking horrendous and unacceptable risks in going out of the camps and getting firewood, sometimes walking for hours” Lautze explained.

“I am incredibly proud of FAO’s team in South Sudan right now. They have been working tirelessly since the beginning of the crisis, and many continue to risk their lives to deliver life and livelihood-saving assistance,” said Lautze.

The Organization is also working to prevent the current crisis from escalating into 2015 by ensuring farmers are ready for next year’s planting season, pre-positioning seeds, agricultural tools, vaccines and fuel-efficient stoves.

“A thriving agriculture sector is crucial to long-term peace and development in South Sudan,” Lautze stressed.

Together, United Nations agencies and partners have received only 50 percent of the total $1.8 billion requested under the Crisis Response Plan for 2014 to carry out urgent humanitarian interventions in the country.