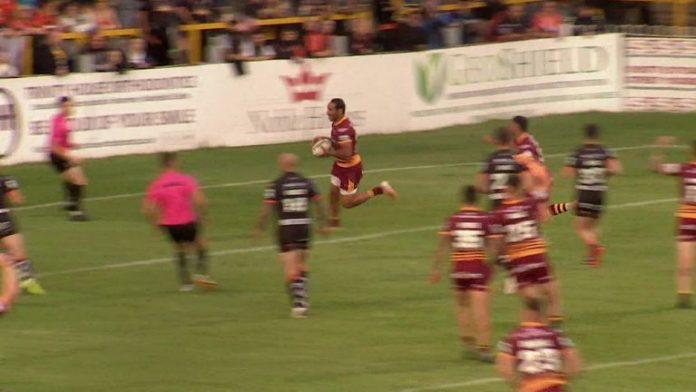 Huddersfield scored five tries, including a brace from Leroy Cudjoe, as the Giants inflicted yet another defeat on the Castleford Tigers

Daryl Powell’s farewell season at Castleford is in danger of petering out after the Challenge Cup runners-up suffered a seventh defeat in their last eight Super League matches.

The young Tigers battled manfully but their play-off hopes suffered another major setback with a 34-16 home defeat by Huddersfield in their first match since Wembley, a low-quality affair between two vastly under-strength sides.

Castleford’s two previous fixtures were called off due to a Covid outbreak in the club which meant Powell was able to include just seven members of his cup final team, including prop Daniel Smith in the role of a makeshift scrum-half.

To make matters worse, Smith was forced off through injury 10 minutes before the interval and skipper Michael Shenton joined him on the sidelines after taking a knock to his face four minutes into the second half.

Smith was able to return in the second half but Shenton was set for a hospital visit after the game to check on the seriousness of his injury.

Powell was forced to bolster his team with the addition of short-term loan signings Jimmy Keinhorst and Jake Sweeting from Hull KR and Featherstone respectively and give more Super League experience to the club’s youngsters.

Huddersfield were only slightly better off, lacking 10 of their first 17 squad men through injury and suspension.

That presented another opportunity for rookie stand-off Will Pryce, the 18-year-old son of former Great Britain international Leon Pryce, in tandem with another promising half-back Russell.

Pryce had demonstrated his try-scoring ability in each of his two previous appearances but he made his mark early in the game through his creativity, working the veteran Cudjoe over for the Giants’ first two tries.

Huddersfield also had a big advantage in the pack. Front rowers Oliver Wilson and Matty English both forced their way over the line only to be held up but there was no denying replacement front rower Nathaniel Peteru as he took Nathan Peats’ pass to crash over for the visitors’ third try.

Russell kicked all three conversions as well as a penalty as Huddersfield led 20-6 at half-time, hooker Paul McShane having scored the Tigers’ points with a try and conversion.

Castleford showed their determination to avoid a repeat of the 70-18 pre-Wembley rout by Salford when full-back Niall Evalds and centre Cheyse Blair combined to get left winger Brad Graham over for his first try for the club.

But they never threatened their opponents’ grip on the game and Russell kicked a second penalty before hard-working forward Luke Yates charged over for a deserved try and winger Jermaine McGillvary added Huddersfield’s fifth six minutes from the end.

Sweeting grabbed a late consolation try, which was converted by McShane, but Castleford are now without a home win since the end of lockdown.