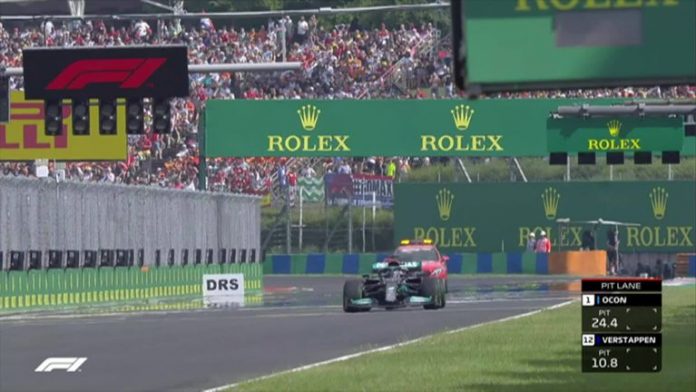 His newly-reclaimed world title lead may have increased as a result, but Lewis Hamilton expressed his disappointment that Sebastian Vettel lost out on second place at the Hungaroring; Aston Martin have until Thursday to submit any official appeal against fuel sample ruling

Hamilton may have directly benefitted from the post-race exclusion, rising from third into Vettel’s second and increasing his title lead over Max Verstappen by two additional points, but he expressed his sympathy for his long-time rival after a strong performance from the Aston Martin driver behind surprise victor Esteban Ocon in Sunday’s remarkable race.

Posting on his Instagram story on Monday, Hamilton said: “I’m so gutted for Seb. It is always an honour to be on the podium with you and you deserved this result.

“What you are doing at your new team is amazing, keep fighting and pushing. See you on track soon.”

Vettel’s car was thrown out of the results late on Sunday night after the FIA’s technical delegate was unable to take a sufficient fuel sample after the race. Only 0.3 litres of the mandated 1-litre sample were able to be pumped out of the car.

Aston Martin have lodged their intent to appeal the decision, having stated that they believe there should have still been 1.44 litres of fuel in the car which was unable to be taken out.

They have until Thursday to formalise an appeal.

The publication by the FIA of the final race result late on Sunday night after the disqualification was confirmed initially caused confusion, with Vettel still being shown in second place in the classification and a note attached saying the result was provisional subject to the outcome of Aston Martin’s appeal notice.

However, in a corrected version of the result published on Monday, Vettel was duly listed as DSQ with Hamilton second and Ferrari’s Carlos Sainz third pending any Aston Martin appeal.

All the other finishing drivers behind the top three gained a position, including Red Bull’s Verstappen who moved into ninth from 10th. However, the Dutchman only picked up one extra point for the place gain whereas Hamilton collected three more by going from third (15 points) to second (18).

It means Hamilton now leads the standings by the same slender eight-point margin that Verstappen himself held coming into Hungary. Verstappen had led the way for two months after claiming the title lead for the first time in his career by winning the Monaco Grand Prix on May 23.

F1 now takes a three-week break before the season resumes at the Belgian Grand Prix, live only on Sky Sports F1 on August 27-29.