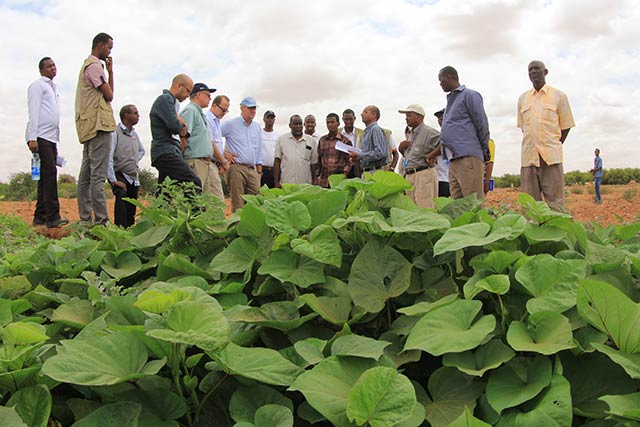 The emergency heads include Dominique Burgeon of the Food and Agriculture Organization of the United Nations (FAO), David Kaatrud of the UN’s World Food Programme (WFP) and Ted Chaiban of the UN’s Children’s Fund (UNICEF), whose last leg of their Somali tour took them to Dollow in southern Somalia and the Horn of Africa. FAO, WFP and UNICEF share the same goal of strengthening resilience in Somalia and reaffirmed their commitment to play a key role for mobilizing change through resilience enhancement while prioritizing the most vulnerable in the region.

The three are part of a larger team of emergency directors from the various UN agencies and international NGOs, led by the UN office of Coordination of Humanitarian Affair (OCHA), with an objective of reviewing the humanitarian situation in Somalia and Yemen.

In Dollow, the directors visited a number of projects under the joint resilience strategy involving FAO of the UN, WFP and UNICEF. However, this year, the UN is confronted with one of the lowest funded Consolidated Appeal Processes (CAP) in years, standing at 24 percent as of June 2014. While visiting one of the UNICEF supported health centers, Chaiban warned that funding shortages is putting millions of lives at risk.

“A big part of resilience building is the establishment of community based basic services,” said Chaiban who visited a UNICEF supported health and feeding center in Dollow. “Almost immediately, UNICEF needs USD 8 million to support 30 NGOs like this one to provide services across Somalia as a whole and if we stop this funding 3 million Somali children and women may no longer have proper access to basic health services,” he added.

Approximately 857,000 Somalis require urgent and life-saving assistance and more than 2 million are facing food insecurity as a result of drought, deficient harvests and ongoing conflict in the country.