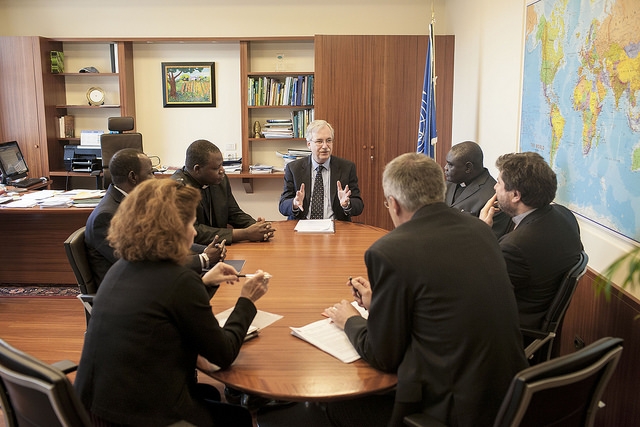 FAO senior officials met today with a high level clerical delegation working in the Central African Republic to talk about FAO’s work in the country and how agriculture can play a role in building peace in the country.

Deputy Director-General for Operations Daniel Gustafson and Emergency and Rehabilitation Division Director Dominique Burgeon, who was recently on a field visit to the Central African Republic, held talks with the Catholic Archbishop of Bangui, Dieudonné Nzapalainga, the chief Imam of Bangui, Kobine Layama Omar, and the leader of the Federation of Protestant Churches of the Central African Republic, Nicolas Guerekoyame Gbangou, invited by the Rome-based Community of Sant’Egidio represented by Angelo Romano. Since 1968, the Community of Sant’Egidio has built up more than 60 000 members in 73 countries worldwide. It played a key role in the peace negotiations in Mozambique, among other peace building initiatives.

Widespread conflict in the Central African Republic has caused a sharp reduction in 2013 crop production and is likely to severely impact the 2014 cropping season, bringing the country close to a full-scale food and nutrition crisis. Burgeon explained that FAO is implementing a variety of projects across the country. He stressed the crucial role of agriculture and the importance of ensuring support to the 2014 cropping season starting in April.

FAO is currently providing seeds, agricultural tools and processing machines and has scaled up its presence to restore agriculture-based livelihoods and improve food security. “We thank FAO for its engagement in the country. We feel that the international community has not abandoned us,” Guerekoyame said after the meeting.

FAO officials and the members of the delegation exchanged their views on the agricultural situation in the Central African Republic, where agriculture represents the main source of livelihood for almost 75 percent of the population.

The meeting was also an opportunity to explore ways for mutual collaboration, taking advantage of the religious leaders’ field knowledge and access to communities, and FAO’s technical expertise. “Agriculture is a great medium to bring people together around the most essential aspects of life such as food and nutrition, in which women play a key role,” Gustafson highlighted.

The discussion noted the crucial importance of political and administrative reconstruction in the country. “Agriculture is the core of our country. We are making an international appeal to accompany the Central African Republic so that people can go back to harvesting and gain their dignity back”, said Dieudonné.

The three religious leaders are in Rome on their way back from a visit to the United States, where they met with UN Secretary-General Ban Ki-moon and held institutional meetings with the US Administration, the International Monetary Fund and the World Bank.