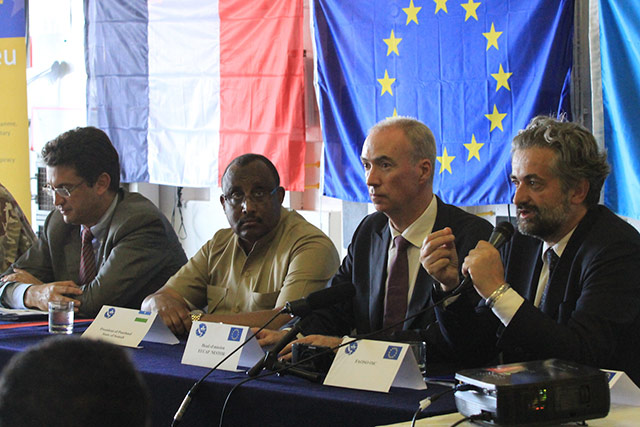 FAO and Puntland authorities have launched the first database for Somali fishermen in decades aimed at improving management of fisheries in the Indian Ocean and the Gulf of Aden.

In the last 12 months, over 3100 fishermen, nearly 50 percent of Puntland’s estimated 6,500 fishermen have been registered using a biometrics system that uniquely identifies individuals by their fingerprints background and physical features, according to Jorge Torrens, the fisheries officer managing the project funded under the New York Anti-piracy Trust Fund.

With a surge in piracy attacks on the Indian Ocean and the Gulf of Aden in 2009, fishermen have since been largely impeded from accessing much of the seas due international anti-piracy activities. It is hoped that the fisheries database will be used by different stakeholders on land and at sea to allow fisher folks to better access certain areas and for general identification purposes.

In embarking on this initiative, FAO aims to improve livelihoods in Somalia’s fishing communities. “This country has the longest coast in continental Africa and is one of the richest in fisheries resources; that is why I am pleased today that we, by developing this database, are helping Somali fishermen get back into business at sea with few hindrances,” said FAO head Luca Alinovi.

EUNAVFOR French Warship Siroco has carried out several ‘Friendly Approaches’ to fishing vessels in the Gulf of Aden in addition to patrols in the Internationally Recommended Transit Corridor (IRTC) in the Gulf of Aden and Indian Ocean. “For long these (Indian Ocean and the Gulf of Aden) have been considered failed seas, however with this database, we now see the first step towards making them manageable seas,” said EU Envoy Michele Cervone.

Jorge Torrents, the project manager said: “Through this fisheries database, information related to the fishermen, fish stocks, size communities dependent of fisheries will go a long way in establishing better management measures that ensure the sustainability of the system and hopefully improve counter piracy activities.”

Piracy has reached its lowest levels in six years, 264 attacks recorded worldwide in 2013 representing a 40% drop since Somali piracy peaked in 2011, according to the latest statistics from the International Maritime Bureau. According to IMB data the fall in Somalia-based attacks off East Africa was the main reason for the drop in worldwide incidents with no successful attack in the last 20 months.

Since the start of the Somali civil war and the subsequent collapse of the state in 1991, the country’s 3,330 km (2,000 miles) of coastline- the longest in continental Africa- remains the country’s most untapped resource.