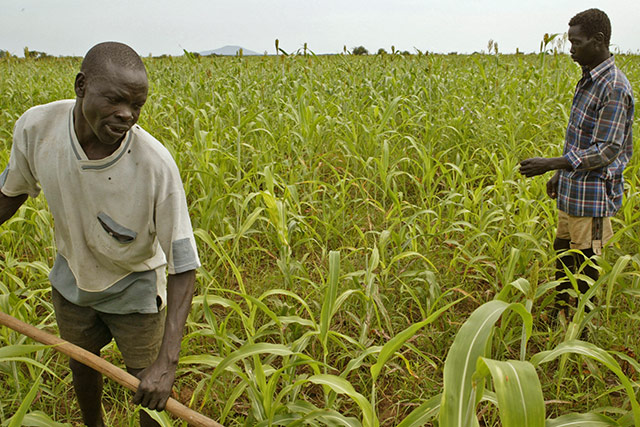 The Government of the United Kingdom has released $13.7 million in emergency funding to FAO to help conflict-affected families in South Sudan restore their agriculture-based livelihoods and stave off an increasingly alarming food security situation.

“Some seven million people are facing the risk of hunger, including nearly one million people who have fled their homes as a result of the fighting and the fear it generates. It’s not only people who are being displaced. Over ten million head of livestock have been taken away from their usual grazing routes,” says Sue Lautze, who heads FAO’s team in South Sudan.

The support for FAO’s work from the United Kingdom’s Department for International Development (DFID) comes at a critical time. “We are working under intense deadlines” says Lautze. “We have an extremely tight window in which to deliver seeds and other vitally-needed inputs to farmers. It’s already starting to rain in some areas. Once the rain comes, it is too late to plant and vast areas become inaccessible.”

DFID’s GBP 8.3 million ($13.7 million) grant will ensure that FAO is able to reach households in time so that they can get seeds in the ground during the current planting season. FAO has appealed for $77 million to assist about 2.3 million people with immediate support designed to help them plant rapidly-maturing vegetables and staple crops, as well as to catch fish and contain livestock diseases.

FAO’s support is built around a two-pronged approach that helps vulnerable households in conflict-affected areas begin to rebuild their shattered livelihoods, while also providing support to farmers in non-conflict-affected areas. FAO can work with those farmers to increase the supply of food in the coming months, to help mitigate the impact of the looming food crisis.

“We have an important window of opportunity to help millions of people in South Sudan, but we have no time to lose in this increasingly alarming situation,” Lautze said. “Funding from generous partners like the United Kingdom helps FAO to support people in setting up farming and marketing operations wherever they are, keeping their livestock fed and vaccinated, and getting equipment to catch fish.”

FAO is putting together a range of different emergency livelihood kits, in the range of $30 each. One kit can provide either six months of staple crops for one family, a year’s worth of diversified and nutrient-rich vegetables, animal health services for 80 families for one month, or enough fish to feed 20 families a day.

In less affected parts of the country, the success of the main planting season will be critical for medium-term food security in the country. In Western Equatoria, which has had the highest production rates in the country over the past five years, farmers have not been directly affected by the conflict and have already started preparing their fields.

Farmers are concerned that the crisis has disrupted input supply chains, markets and development initiatives throughout the country. FAO aims to help them gain access to quality seeds, tools, training and other support needed to ensure reasonable production in 2014. This is important for ensuring food availability later this year, particularly given the country’s current cereal production deficit of 400 000 tonnes.

FAO directly supports farmers through its seed-multiplication programmes, through which producers in less affected states produce seeds for humanitarian operations in conflict-affected areas in eastern states.

FAO has mobilized more than $6 million to date and is in discussion with a variety of donors for another $25 million, but available funding falls far short of what is needed to get help to families.

“Time is of the essence given that most of the roads in the most affected states will be flooded during the rainy season,” Lautze added. “We will need to consider switching from delivering by road to delivering by air. This is both more expensive and less effective, but we must do everything we can to help in this time of need.”