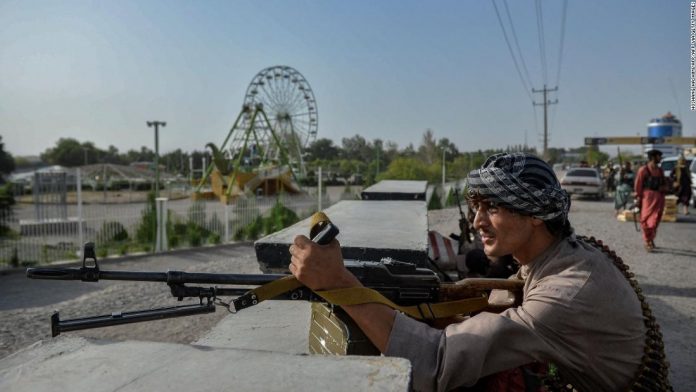 The explosion occurred close to Bismillah Mohammadi’s residence, where four assailants were also killed by Afghan security, according to Fawad Aman, a defense ministry spokesman. The acting minister was not at home when the attack occurred and his family is fine, Aman added. No one has claimed responsibility for the attack yet.
Earlier on Tuesday, an Afghan army commander had urged people in Lashkar Gah, the capital of Helmand province, to leave their homes if the Taliban was active in their area. Concerns continue to mount over the civilian toll of the militant group’s advance on some of the country’s biggest cities.
Sami Sadat, who commands the 215 Maiwand Corps, said Monday that the military would be intensifying the fight against the Taliban in Lashkar Gah, and warned locals that it was best to leave in order to carry out their mission effectively.
“We won’t spare the Taliban alive at any cost,” Sadat said in a voice message distributed to media. “My request is that if … you get displaced for some days, please forgive us, as soon as you can please leave those areas where the Taliban [are]” so the military can fight the group in those areas, he added.
There is growing evidence that civilians are being killed and wounded in the ongoing clashes in Lashkar Gah.
The UN Assistance Mission in Afghanistan (UNAMA) tweeted Tuesday of its “deepening concern for Afghan civilians” as fighting worsens.
At least 40 civilians have been killed and 118 civilians injured within the last 24 hours in Lashkar Gar, UNAMA said Tuesday, adding that “UN urges [an] immediate end to fighting in urban areas.”
Human Rights Watch echoed the UN’s concerns on Tuesday, saying that “indiscriminate attacks, including mortars, rockets, airstrikes, other explosive weapons and gunfire are causing catastrophic injuries and deaths in Lashkar Gah.”
Images and video from the city showed university buildings on fire Tuesday. The Taliban claimed that Bost university was hit by an airstrike; there’s been no word from the government.
Two police districts and a state-run TV station are now under Taliban control in Lashkar Gah. The city sits on strategic routes in all directions, including the highway between Kandahar and Herat and important agricultural areas to the south of the city. While the Taliban has long had a strong presence in Helmand province, including areas around Lashkar Gah, it has not occupied any part of the city since they were overthrown in 2001.
A local journalist in Lashkar Gah told CNN on Tuesday that fighting was continuing in two districts and that the Taliban had gotten close to the city’s prison before they were pushed back. The journalist reported new airstrikes on Tuesday morning against the Taliban.
Fifty high-value prisoners have been moved from the jail because of the ongoing fighting, a senior Afghan security official told CNN, with attempts being made to move another 85.
“Helmand might fall,” the official added, in a rare admission by authorities of how imperiled the southern province is in the face of the Taliban offensive.

In recent days, the United States has ramped up airstrikes on Taliban positions in an attempt to halt the militants’ advances on Lashkar Gah, along with the provincial capital cities of Herat and Kandahar.
A US defense official detailed a grim assessment of the deteriorating situation on Monday, telling CNN: “It’s not going well.”
The fighting is ongoing in Herat province, where the Taliban now controls 13 of 16 districts, according to the Long War Journal, a US nonprofit that tracks control of territory in Afghanistan. Most of its gains came in the month of July.
On Tuesday the Defense Ministry said in a tweet that 41 Taliban had been killed in what it called “joint clearing operations” on the outskirts of Herat, saying that “vast areas” of the city were cleared of “Taliban terrorists.” Meanwhile, a Taliban spokesman claimed that several areas of Herat had fallen to the group and that “Afghan forces and the militia of Ismail Khan are escaping and running from the area.”
Neither side’s claims can be independently verified. Residents of Herat city that CNN spoke to on Tuesday appeared largely exhausted by the chaos.
Ismail Rasooli, a 40-year old shopkeeper, said there was no security in the province and that it was impossible to sleep at night because of the clashes. Rasooli said the Taliban were “too close” but that he wasn’t afraid of the group overtaking the city.
“What is important for us is security, (there’s) no difference for us if the Afghan government rules or the Taliban,” he said, adding: “We are fed up of the corruption inside the government system, we hope that we get a better government.
Another Herat resident, who preferred to stay anonymous, told CNN that as the Taliban occupied the outskirts of the city, he had evacuated his family to another province.
On Monday night, he said, people had started chanting “Allahu Akbar” in support of the Afghan security forces.
He said residents were divided into two categories: Those working with the government and non-government organizations, who are afraid of the Taliban, and those who are self-employed, who aren’t.

CNN’s Barbara Starr and Kara Fox contributed to this report.