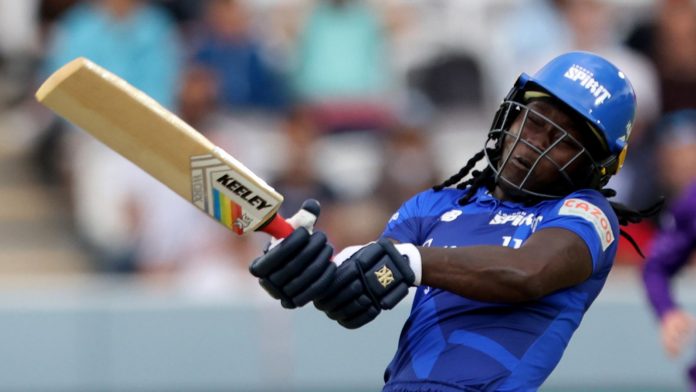 Jemimah Rodrigues’ knock of 57 from 44 balls was not enough to maintain Northern Superchargers’ unbeaten record in the Hundred as they went down to London Spirit by seven wickets, with Deandra Dottin hitting 50 not out from 34

Deandra Dottin hammered an unbeaten 50 from 34 balls to steer London Spirit to a seven-wicket win at Lord’s and inflict a first Hundred defeat on Northern Superchargers.

Jemimah Rodrigues began slowly, but she soon unveiled the sweep to combat Spirit’s spinners and accelerated to reach 57 from 44 balls, sharing sizeable partnerships with Laura Wolvaardt and Alice Davidson-Richards, who both contributed 22.

Medium-pacer Sophie Munro, with 2-20 from 15, was the pick of the bowlers, while Deepti Sharma finished with 1-19 from 20 as London restricted their visitors to what looked a par total.

Superchargers spinner Linsey Smith put the home side under pressure with figures of 2-15, including the key wicket of Spirit skipper Heather Knight, leg before attempting a reverse sweep.

But Tammy Beaumont (42 from 36) added 56 for the third wicket with Dottin, whose powerful striking of the ball carried London over the line with two balls to spare.

Dottin finished the match with successive off-side boundaries off Kalea Moore, the second of them bringing up her first 50 of the tournament and ending Superchargers’ undefeated record.

Doubts may have been creeping into the Spirit camp when they lost Knight – and their hopes of victory would surely have faded altogether if Dottin’s bottom edge off Davidson-Richards had deflected onto the stumps early in her innings.

Deandra Dottin delivers to guide #LondonSpirit 🔵 to victory over #NorthernSuperchargers 🟣 with two balls to spare!

Fortunately for Dottin, the ball flew away to the boundary instead and London never looked back as the big-hitting batter wrapped up only their second win of the tournament.

As one of Spirit’s marquee signings, Dottin’s arrival at the Hundred party was overdue – but it was well worth the wait as she ended their losing run in style, hitting eight fours in her unbeaten 50 from 34 balls.

Three of them came from one set of five by Phoebe Graham, who was literally hit all over the park with a ferocious pull, straight drive and cut as Spirit closed in on a seven-wicket victory.

Danielle Gibson deserved better than the boundary she conceded from a crafty inswinger that came within a whisker of ending Rodrigues’ stay at the crease when she had only eight to her name.

What a tournament the Superchargers opener is having! 👏

The Superchargers’ batter got a faint inside edge that was enough to divert the ball beyond her stumps and away to the fine leg for four. Oh, what might have been…

Wolvaardt had an opportunity to show off her gymnastics skills while Rodrigues was in full flow during their second-wicket stand, clubbing a Sharma full toss straight back past the bowler.

The non-striker leapt in the air and did the splits to ensure she got out of the way – and umpire Anna Harris later displayed similar agility, leaping to one side to evade Naomi Dattani’s full-blooded straight drive during the Spirit reply.

“I think today I gave myself a chance by taking my time and assessing the pitch as well.

“In the first couple of games, I pressed the go button a bit too early and didn’t give myself that opportunity.

“I was a bit nervous, but I didn’t feel pressure as I knew if I stayed there I’d get the bad balls to hit.

“We spoke at the last strategic time-out about rotating the strike and picking up the bad balls, but once I got that first four off Phoebe (Graham) where she’d brought up the field and allowed me to hit over mid-on, she pushed the field back after that and I just capitalised.”

“When you are in good form, you just have to try and make the most of it. So I’ve been keeping it simple, timing the ball well in the nets and when I go out there I just want to continue my form as long as possible.

“I was glad Laura (Wolvaardt) and I could share a very good partnership. Initially Laura helped me a lot because I wasn’t hitting my boundaries, but she hit three and then when I got my timing I started a bit too.

“We could have carried out our plans a little better, but it is a learning curve and I always believe losses teach you more than wins.

“It is every Indian player’s first dream to play for their country, the second dream is to play at Lord’s and it was more special as I managed to score some runs.”

We’re back at Edgbaston on Wednesday – and something has to give as Birmingham Phoenix and Oval Invincibles, both coming off back-to-back defeats, clash in the women’s game at 3.30pm.

They’re followed by the men’s sides, who are both jockeying for position in and around the top three and get under way at 7pm.

Both games are lives on Sky Sports Mix, as well as the Sky Sports Cricket YouTube channel!