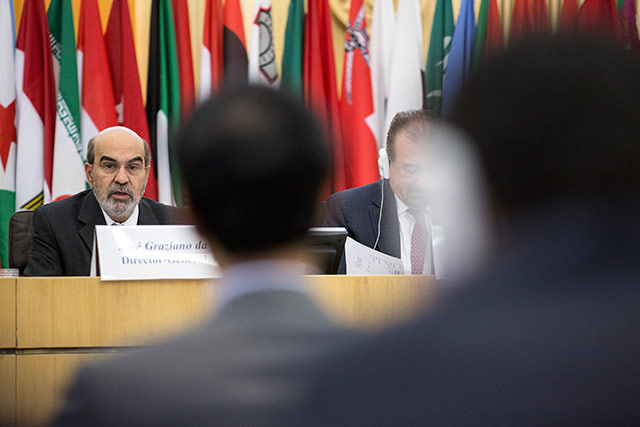 The worsening of the food security situation in the Near East is not only caused by the structural constraints the region faces in producing enough food and an increasing dependence on food imports but by conflict, the flow of refugees and migration, FAO Director-General José Graziano da Silva said today.

Opening the two-day ministerial segment of FAO’s Regional Conference for the Near East, Graziano da Silva underscored that these issues are not contained by national borders.

“They affect the region as a whole and have repercussions far beyond as well,” he said.

“We know that there is an intrinsic link between peace and food security, and between hunger and conflict.

“We have seen how dispute for food and over resources such as land and water have triggered conflict.

Noting that 2014 is the International Year of Family Farming, he encouraged countries to increase support to family farmers in the region by ensuring access to adequate technologies, financial services, markets, and natural resources such as land and water.

He also encouraged countries to participate in discussions on the Committee on World Food Security’s proposed Principles for Responsible Agricultural Investments, which will help to ensure investments contribute to the development of family farmers.

During the period 2012-2013, $100 million were mobilized to support FAO’s work at national level, in particular in countries affected by conflict and emergencies, the Director-General reported.

“However, funding still remains a major constraint to scaling up FAO’s work at country level in the region,” he said, calling on higher-income countries in the region to step up their support.

Graziano da Silva said he hoped other countries would follow the good example of regional cooperation set by the Government of Iraq, whose contribution will help kick-start a Regional Solidarity Trust Fund.

A region-wide strategy and funding to support food security in Yemen is of particular importance, he said.