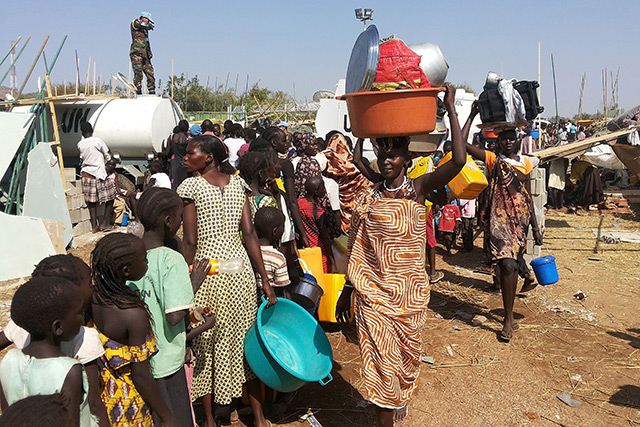 The conflict in South Sudan risks reversing gains in food security that the country had made over the last year, according to the United Nations Food and Agriculture Organization (FAO) and the World Food Programme (WFP).

The two agencies said on Friday that when conflict erupted in December 2013, South Sudan’s food security outlook was the best it had been in five years, but the consequences of the conflict threaten to undo the country’s progress toward food security, and are likely to impact even parts of South Sudan not directly affected by fighting.

FAO and WFP say the crisis has led to widespread population displacement, loss of food stocks and disruption to trade and migration routes that are pushing millions more into hunger.

“Before mid-December, there was every indication that South Sudan had taken a step forward on food security, but the crisis is taking the country three steps backward instead,” said WFP Country Director Chris Nikoi. “Displacements caused by the conflict have left many people needing urgent food assistance.”

The states most affected by the conflict, namely Jonglei, Upper Nile and Unity, were also the most food insecure prior to the conflict, the agencies said. Compared to the rest of the country, those three states had higher levels of severe food insecurity, the highest cereal deficits in the country and very high dependency on markets for staple food.

“The livelihood systems in these states are diversified, with crops contributing only a portion of annual food needs,” said Dr. Sue Lautze, FAO’s Head of Office in South Sudan. “What is worrying now is the impact of the conflict on not only crops but also livestock, fishing and trading,” Lautze added.

Continuing insecurity is affecting trade routes through which food supplies are brought to other wider areas of South Sudan. The disruption in food supplies is taking place as households exhaust their stocks and enter the period when dependency on markets for food supplies becomes greater, the report said.

Significant delays caused by conflict will also have a serious impact on the ability of households to produce food for the next planting season.  Continued unrest is disrupting the coming agricultural season as planting activities need to start across the country from mid-March to mid-June.

The agencies’ concerns are outlined in a recently released report called the FAO-WFP Crop and Food Security Assessment Mission to South Sudan (CFSAM), conducted every year by the two UN agencies and the country’s Ministry of Agriculture.  The CFSAM is an important tool in assessing South Sudan’s agricultural production and food availability. The CFSAM team, working in collaboration with the Government, collected data for the annual assessment in October and November. At the time, food insecurity was at its lowest in five years due to a sequence of two good harvests coupled with lower market prices for staple foods. The percentage of people with inadequate food consumption had declined to 33 percent in October 2013, compared to 40 percent at the same time in 2012.

After the outbreak of conflict, the CFSAM team re-analyzed the results of the study to estimate the impact that the crisis would have on South Sudan’s overall food security. The report warns that, because of the ongoing crisis, an additional two million people or more are likely to experience significant food scarcity in 2014. The number of people in “crisis” and “emergency” food security conditions is estimated to have more than tripled. More than one million people are now estimated to be in “emergency” food security phase as opposed to none prior to the conflict.

WFP is expanding its operations in South Sudan to provide food assistance for 2.5 million conflict-affected and food-insecure people, and is deploying mobile distribution teams to reach remote areas. WFP urgently requires US$432 million to meet immediate needs and to preposition food stocks in secure sites where possible before the rainy season renders much of the country inaccessible. In states not directly affected by the conflict, WFP continues its efforts to use food assistance to strengthen resilience and livelihoods through community-level asset creation and support for nutrition and education. WFP relies entirely on voluntary funding, and is appealing for urgent contributions.

FAO is working to support those affected by the crisis to help people to help themselves through supporting livelihoods. With many of the displaced now residing along the banks of the Nile and Sobat rivers, providing FAO fishing inputs is a key, immediate source of food and income. FAO’s current response priorities include:

In addition, as co-leads of the Food Security and Livelihood Cluster, FAO and WFP continue supporting the coordination of partners within and beyond the United Nations.

An estimated 78 percent of South Sudan’s rural population relies on various aspects of agriculture for their livelihoods, including cropping, livestock, forestry, fisheries and agriculture-related wage labour.  The conflict is affecting major supply routes, displacing traders and leading to rising food and fuel prices, along with the breakdown of local markets which are crucial to rural farmers, fishers and livestock-dependent populations.