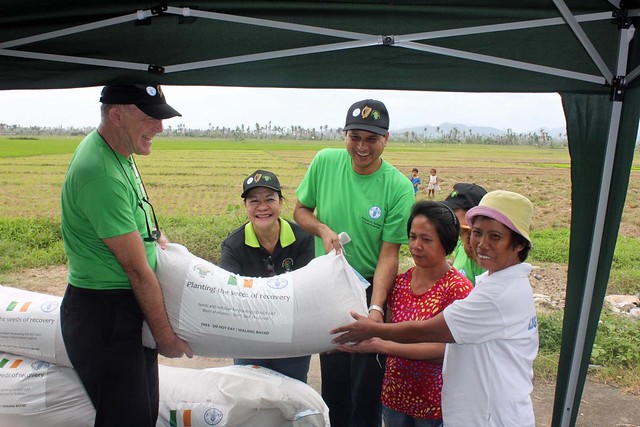 During a visit to an FAO project near Tacloban, Joe Hayes, the non-resident Irish Ambassador to the Philippines applauded the resilience of the farmers and fishers whose lives and livelihoods were devastated by Typhoon Haiyan (known locally as Yolanda), and highlighted the need for longer-term support.

“You are the best people on earth,” Hayes said, “and your strength and courage should be a lesson for everyone.”

The Ambassador visited an FAO rice seed project funded by Irish Aid and agreed that the impact was visible on the ground, providing real value for money for Irish taxpayers. To date, FAO support in the form of rice seed to 44 000 farming families has cost around USD 5 million and is expected to yield an estimated USD 84 million in rice, enough to feed more than 800 000 people for a whole year.

“Where I’m from, in far away Ireland, we also have lots of farmers and fishers. I grew up on a farm myself,” he said, addressing FAO-supported farmers during a ceremonial handover of rice seed in the Barangay of Kabangkalan, Santa Fe municipality on the Island of Leyte.

“I will go back to my capital and tell them about your stories and your needs. I am committed to doing my best to support the small-scale farmers of this country, and I believe there’s a need to sustain our efforts so recovery can be for the long term,” he added.

The Ambassador also visited affected fishers and coastal communities near Tacloban, witnessing first-hand the extensive damage the typhoon unleashed on these vulnerable groups.

The devastating storm surge that accompanied the typhoon washed away whole coastal communities and left several large ships sitting amid devastated villages near Tacloban, a scene reminiscent of the 2004 Indian Ocean Tsunami.

Accompanying the Ambassador for the visit were Rajendra Aryal, the acting FAO country Representative in the Philippines, and officers from the Bureau of Fisheries and Aquatic Resources, the Department of Agriculture and the local government.

“FAO has made sure that affected farming households were able to plant rice in time for the December/January planting season, thanks to Ireland and other donors’ support,” Aryal said.

“If we had not been able to help them plant in time,” Aryal continued, “they would have had to wait until October 2014 to harvest, a long time to rely on food aid. Timely support has enabled us to assist those affected by Yolanda.”

“It is important that the international community does not forget the farmers and fishers of the Philippines. We count on the commitment and support of the donor community to ensure that this good work is not rolled back,” Aryal concluded.