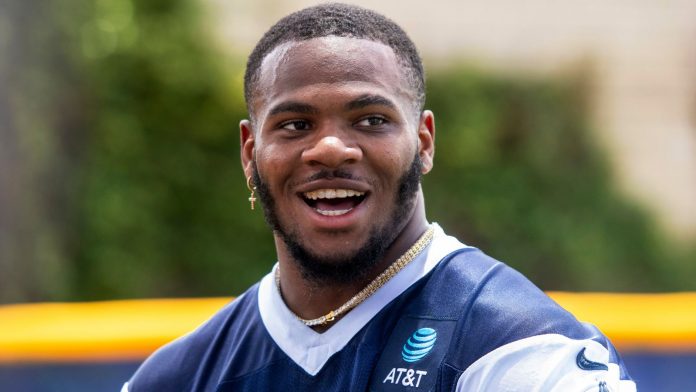 Watch the Dallas Cowboys take on the Pittsburgh Steelers in the NFL Hall of Fame Game live on Sky Sports Main Event from 1am in the early hours of Friday morning.

The football-less weeks are over and the NFL is well and truly back as teams step up their preparations for the 2021 season.

Thursday night will see the Dallas Cowboys and Pittsburgh Steelers announce the return of preseason after a year away due to the coronavirus pandemic as they meet in the Hall of Fame Game at Tom Benson Hall of Fame Stadium in Canton, Ohio.

Mike McCarthy faces a potentially defining year in his Cowboys tenure on the back of a 6-10 season, while the Steelers and Mike Tomlin teeter towards the end of Ben Roethlisberger’s career and the important decision that awaits them at quarterback.

Preseason is preseason, a mere teaser that lacks any real substance. But football is football, and this comes as a welcome glimpse at some new and some more familiar faces in action.

We’ve picked out five things to keep an eye on…

Mason Rudolph is primed to start at quarterback for the Steelers as first choice backup to Roethlisberger, however there will be an opportunity for Dwayne Haskins to come in and make his debut for the team after signing on the back of his release by Washington earlier this year. The 2019 first-round pick is seeking a fresh start in Pittsburgh in the wake of a stuttering start to his NFL career, which saw him quickly fall out of favour with Ron Rivera last season as he was criticised for his work ethic before finishing the year 148 of 241 passing for 1,439 yards, five touchdowns and seven interceptions in just seven games (six starts).

Not only does he have Roethlisberger to use as a sounding board, but he also finds himself working with a new offensive coordinator in Matt Canada designed to implement a more modern and creative feel to proceedings having taken over from Randy Fichtner. With Big Ben seemingly approaching the end of his time under center, the battle among the likes of Haskins, Rudolph and Josh Dobbs is one to monitor from now until the end of the season.

Thursday game could provide a first look at what the Cowboys will be desperately hoping is a revitalised defense under newly-appointed coordinator Dan Quinn, who took over from Mike Nolan at the end of last season. It remains to be seen which of the presumed starters will feature and of course preseason conditions make for fairly unreflective performances, but there will be added intrigue surrounding first-round rookie linebacker Micah Parsons in light of rave reviews coming out of training camp.

“He needs to play opening day,” said head coach Mike McCarthy said. “You have to trust what your eyes are telling you. And when I watch him, I see a fluid and explosive player. This game’s not too big for him. Some guys run 4.3. Some guys play 4.3. He’s the kind of guy who plays fast. He looks like he’s done this at this level before.”

Having worked primarily as the MIKE linebacker in rookie camp, Parsons has recently spread his time between featuring as an outside linebacker and even striving to challenge doubts over his ability in coverage. And with the Cowboys beat scene also suggesting Jaylon Smith and Leighton Vander Esch have returned looking as healthy as they have in some time, things might be looking up.

The line set to play an integral role in prolonging its veteran quarterback’s career marks one of the prime areas of uncertainty for the Steelers heading into 2021 after the team released David DeCastro, saw long-serving center Maurkice Pouncey retire and lost Alejandro Villanueva to the Baltimore Ravens in free agency.

Don’t expect Thursday to be a preview for Week One, either. Right tackle Zach Banner is likely to be protected as he returns from the season-ending ACL injury he suffered in the opening game last year, while center J.C. Hassenauer has been nursing a knee problem picked up at the beginning of camp.

The Steelers are hopeful Chukwuma Okorafor, a third-round pick in 2018, can transition smoothly from right to left tackle, there will be an added onus on second-year interior lineman Kevin Dotson to cement himself as a 17-game stalwart and Kendrick Green and B.J. Finney will meanwhile fight it out to plug the gap left by Pouncey at center. Second round rookie tight end Pat Freiermuth left Wednesday’s practice early with a shoulder injury that puts his involvement in slight doubt, but it will be interesting to see how his blocking responsibilities evolve throughout the coming months.

A miserable 2020 campaign for the Cowboys somewhat overshadowed CeeDee Lamb’s introduction to the NFL after Jerry Jones jumped at the opportunity to snap him up in the first round amid one of the most gifted pool of wide receiver options in recent Draft memory. And though injury to Dak Prescott ultimately derailed the Cowboys’ season, Lamb still managed to offer glimpses of his route-running artistry and playmaking ability as he finished year one with 69 catches for 935 yards and five touchdowns.

With Dak back and raring to go again, the former Oklahoma man looks well positioned to reel off his first 1,000-yard receiving season. Prescott won’t be involved in Canton on Thursday night, however there may be an eagerly-anticipated run out for a man who is catching everything at training camp.

The Steelers looked like they were running through glue and into a brick wall as their rushing attack ranked dead last in 2020. You would expect this season to be very different.

Having bid farewell to James Conner in free agency, the team went out and filled the void by selecting Alabama’s Najee Harris with the 24th overall pick at the Draft. The Steelers have since made no secret of their intent on moving forward with him as a legitimate three-down running back, his dual-threat expertise poised to warrant immediate volume in touches as a key player within Canada’s scheme. Harris also looks a perfect candidate to soften the expectation on an ageing Roethlisberger, who struggled when the ground game disappeared last season.

“The thing I love about Najee, even in college, is that he was able to fight for extra yards even though his offensive line missed a block or two,” said defensive tackle Cam Heyward. “He made me miss and got five yards. I hate it now, but I’ll like it during the season.”

There is every chance this Steelers offense runs through Harris from the off, which for the neutral means a catalogue of slaloming highlight-reel runs. Perhaps beginning on Thursday night…