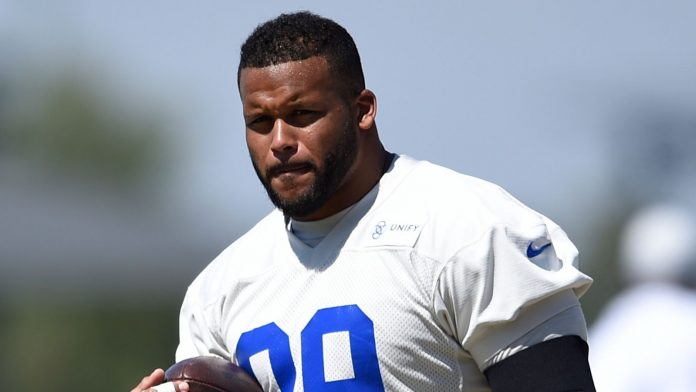 You can never have enough capable pass rushers in the NFL.

Sure, the Los Angeles Rams have the most disruptive interior defensive lineman in the game in Aaron Donald and outside linebacker Leonard Floyd, who signed a four-year contract worth $64m after getting 10.5 sacks in his first season with the team, to get after the quarterback. But finding complementary pieces around them is an emphasis during training camp.

“If we can go out and make those memorable plays, those plays that make a difference in the game to help us win football games, that’s all I’m here for and all I care about,” new defensive coordinator Raheem Morris said.

With Donald and Floyd each held out of practice on Wednesday to rest, the Rams were still able to generate pressure from the likes of defensive tackle Sebastian Joseph-Day and outside linebackers Justin Hollins and Obo Okoronkwo.

It was what coach Sean McVay had hoped to see in the absence of the two standout defenders.

It was also a welcome sign for a team that lost its third, fourth and fifth-leading sack producers from last season, taking 14.5 combined quarterback takedowns with them.

Morgan Fox, who had six sacks mostly as an edge rush specialist in obvious passing situations, signed with Carolina as a free agent.

Michael Brockers, a longtime presence on the defensive line who had five sacks, was traded to Detroit to help the Rams get under the salary cap. Samson Ebukam, who had 4.5 sacks as the starting outside linebacker opposite Floyd, signed with San Francisco as a free agent.

But if Joseph-Day, Hollins and Okoronkwo can carry over their early camp efforts into the regular season, it would seemingly address all of those departures.

Hollins is getting the first chance to replace Ebukam. He had 28 tackles and three sacks last season after being claimed off waivers from Denver last September, and McVay identified Hollins prior to training camp as someone he was excited to see after having an offseason with the Rams.

“I think Justin Hollins is a guy that used all the things that he did really well last year and he’s really continued to build and grow,” McVay said.

Okoronkwo showed he could rush the passer at Oklahoma, and he could slot into Fox’s specialist role in his fourth season.

But the most intriguing development would be seeing Joseph-Day able to consistently generate pressure. A sixth-round draft pick in 2018 out of Rutgers, he was used as a run-stuffer in his first two seasons with the Rams.

Joseph-Day was determined to become a more complete player, so he put in the necessary work to develop pass rush moves.

“Studying the game, studying other players and offseason stuff,” Joseph-Day said. “A lot of hours. Not trying to brag on myself, but it was a lot hours, a lot of hours.”

With Donald usually drawing double teams in the opponents protection scheme, it creates one-on-one opportunities for whoever lines up next to him. Brockers was one of those to benefit, totaling 13.5 sacks in his final four seasons with the Rams.

Joseph-Day could do the same if he now has the skills to take advantage of those favorable matchups, and Donald has been impressed with the initial results.

“He just keeps getting better and better,” Donald said. “He’s a big-bodied guy, strong guy that can do it all. He’s getting more confident and the more confident you get, he’s a tough guy to try to block.”