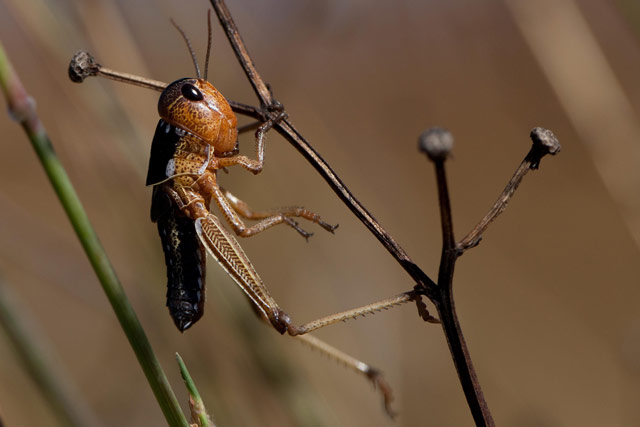 A locust control campaign is starting in Madagascar against a plague of the Malagasy Migratory Locust, which threatens the food security and livelihoods of 13 million people or nearly 60 percent of the island’s population.

Aerial survey operations to identify and map out the areas requiring treatment by pesticides are expected to get underway this week. In the meantime, ground surveys, conducted on a monthly basis since February, continue. Procurement of pesticides, vehicles and equipment for survey and control operations is in progress.

Spraying operations are expected to start by late October, after the onset of the rainy season.

This is the first of three successive locust control campaigns that will take place between September 2013 and September 2016 as indicated in a three-year programme, jointly prepared by FAO and the Madagascar Ministry of Agriculture. The programme is expected to be implemented and coordinated by FAO in close collaboration with the government and in particular the Ministry of Agriculture. It will eventually treat over 2 million hectares of infested areas.

“Of the 13 million people at risk, nine million are directly dependent on agriculture for food and income,” said Patrice Talla, FAO Representative in Madagascar. “The locust campaign is vitally important to try to limit any further damage to poor farmers’ crops.”

So far, FAO has raised $23 million towards the programme, which will cost $41.5 million over three years. Negotiations for further funding are at an advanced stage although millions of dollars are still needed to complete the full programme.

“Prevention is much better than cure in locust control,” said Ren Wang, FAO Assistant Director-General for Agriculture and Consumer Protection. “We have enough funding to start the first year’s campaign and try to bring the locust plague under control so it doesn’t last years and cost hundreds of millions of dollars. But we need more funds over the next three years to finish the job.”

The campaigns focus on:

The locust plague started in April 2012. Vast swarms of the highly mobile insect have damaged large areas of cropped land and pastures. Although the locusts have mainly hit the south of the country, in late 2013/early 2014 some insects are expected to reach the more productive northern regions, according to an FAO locust damage assessment mission conducted in April-May 2013.

Damage to cereal crops, including rice, the main food staple, and maize, were estimated as much as 70 percent in some regions. Off-season production is expected to have decreased compared to previous years as farmers are reluctant to plant because of the locust threat.

The soon to be released report from a joint FAO/WFP Crop and Food Security Assessment Mission, conducted in June/July 2013, will provide more information on the outcome of the 2013 cropping season and the food security situation.

This campaign could not have started without the support of the international community and the Malagasy Government through direct funding and pesticide grants. Confirmed contributions towards the locust control programme have been made by Austria, Belgium, the Central Emergency Response Fund (CERF), European Union, France, Madagascar through a World Bank loan, Norway and USAID. In-kind donations of conventional pesticides have been made by Mauritania and Morocco.