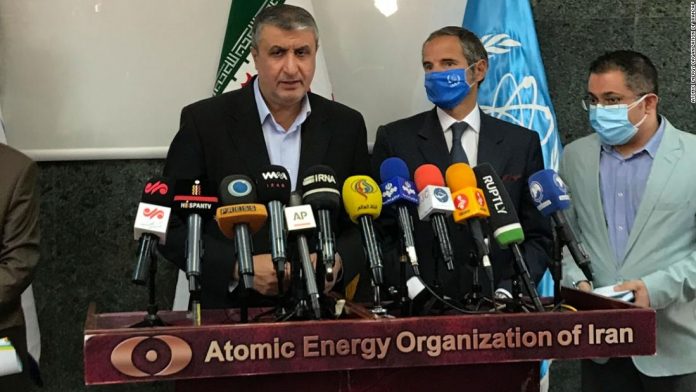 The agreement comes ahead of a key IAEA meeting on Monday — and has been touted as a sign that the relationship between Iran and the IAEA is moving forward following its breakdown in the past few years.
“The parties recalled and reaffirmed the spirit of cooperation and mutual trust and its continuation and emphasized on the necessity of addressing the relevant issues in a constructive atmosphere and exclusively in a technical manner,” said the head of Iran’s Atomic Energy Organization (AEOI) Mohammad Eslami and IAEA Director General Rafael Grossi in a joint statement on Sunday.
According to the statement, which followed the two chiefs’ meeting in Tehran over the weekend, IAEA inspectors will be permitted to service the equipment and replace their storage media which will be kept under the joint IAEA and AEOI seals in the Islamic Republic.
Iran has previously said it was planning to prevent the IAEA from reviewing video footage of some nuclear sites until there is an agreement to salvage the 2015 nuclear deal it signed with the US, UK, France, Russia, China and Germany. Under the deal’s terms, Iran had agreed to restrictions and international monitoring on its nuclear development, in return for sanctions relief. However, the deal has faltered since then-President Donald Trump’s withdrawal from the pact in 2018.
Following the agreement on Sunday, IAEA will be able to at least service equipment for nuclear monitoring in Iran.
Eslami was quoted by Iranian news agency Tasnim as saying the negotiations on Sunday were “constructive.”
“We have agreed in the next meeting of IAEA that Iran will participate and on the sideline of the meeting we will continue the negotiations,” Eslami said, according to Tasnim.
“We also agreed that the head of IAEA will travel to Iran in the near future and will negotiate with the officials. For us trust building is highly important and we want mutual trust between Iran and IAEA — it is important,” Eslami added.