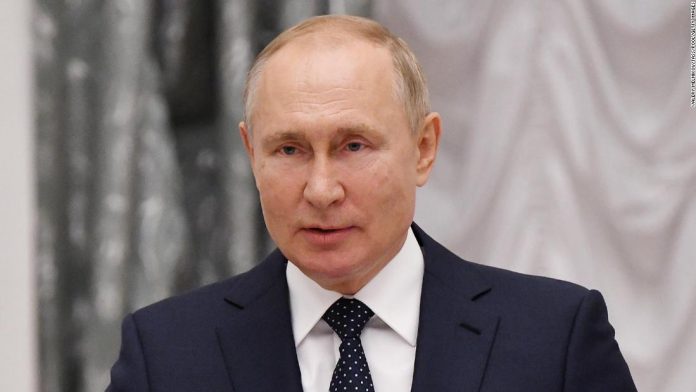 Putin told a summit of the Collective Security Treaty Organization (CSTO) in the capital of Tajikistan, Dushanbe, via video link that he was unable to attend in person as he’s in quarantine.
“Unfortunately, I had to cancel my visit to Dushanbe at the last moment. I am very sorry about that, but this is due to the fact that in my immediate environment, cases of coronavirus have been identified,” he said.
“This is not one, not two, but several dozen people. And now it is necessary to self-isolate for several days. Unfortunately, I cannot shake hands with each of you, hug you. But of course, we are interested in discussing key goals of our organization albeit remotely.”
On Tuesday, the Kremlin said Putin was quarantining after people in his inner circle tested positive for Covid-19. Kremlin spokesman Dmitry Peskov said Putin had tested negative for coronavirus and was “absolutely healthy.”
Peskov told journalists in a conference call that as “several people” in Putin’s entourage got sick the President “must take a responsible position and not endanger the health of his colleagues.”
The spokesman did not specify who has tested positive and said he didn’t know whether the individuals had been vaccinated.
During a televised meeting with government officials and members of the ruling United Russia party, Putin said several people in his “innermost circle” had contracted the virus, including one staff member with whom he worked closely on Monday.
The staffer was vaccinated and recently got “revaccinated,” Putin said, apparently referring to a booster shot, which Russia is now offering to those immunized more than six months prior.
“He was revaccinated, apparently, a bit too late. He fell ill three days after the revaccination. The day before I communicated with him very closely, all day long,” Putin said.
“This is an experiment — let’s see how Sputink V actually works. Because my [antibodies] are high. Hope everything will be as it should be and Sputnik will show its high parameters for protection against Covid-19 in real life,” he added.
Putin — who was vaccinated against Covid-19 in March — had a busy day on Monday. He held face-to face talks with Syrian President Bashar al-Assad, met a number of Russian Paralympians and inspected troops taking part in military exercises in Nizhny Novgorod.
Russia is among the countries worst affected by the coronavirus pandemic, reporting the eighth highest number of cases globally. As of Tuesday, it had officially recorded more than 7 million cases and 190,000 deaths, according to World Health Organization data.
It is currently battling a devastating third wave of infections, with weekly deaths at some of the highest levels so far.
Russia has developed several Covid-19 vaccines, but it is battling persistently low vaccination rates — a problem caused by high levels of hesitancy among its population. Just over a quarter of Russians have received the shot, compared to more than a half in the United States and two thirds in the United Kingdom, according Our World in Data.