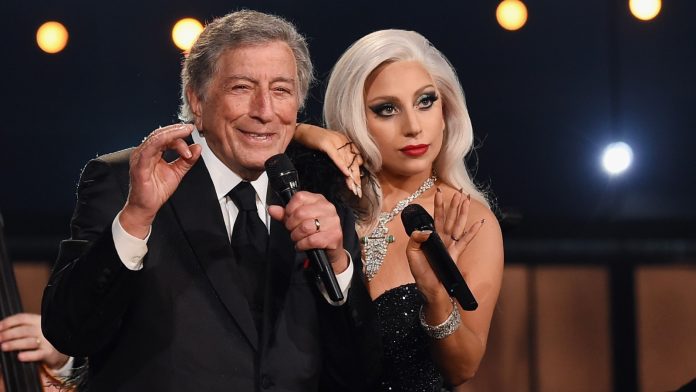 “We are honored to partner with the legendary Tony Bennett and the iconic Lady Gaga for ViacomCBS’ biggest cross-platform music talent collaboration to-date” said Bruce Gillmer, Chief Content Officer, Music, Paramount+ and President of Music, Music Talent, Programming & Events, ViacomCBS. “With the sweeping range of our unique brands and platforms, ViacomCBS offers an unparalleled one-stop shop for artists to showcase their global music releases and creative content of all varieties.”
The deal ties in with Bennett and Gaga’s new album, “Love for Sale,” which will be released Oct. 1. The title track “Love For Sale” debuts Friday, and the video will have ab MTV Global premiere at 12PM ET.
“Tony Bennett’s resurgence began in the 90’s with his MTV Unplugged and it’s timely that the last chapter ends on the same note,” said Bennett’s longtime manager, Danny Bennett.
In February, the singer and his family announced that he was diagnosed with Alzheimer’s in 2016. Bennett and Gaga performed two shows in August that were billed as his last live shows.
The ViacomCBS partnership includes the following:
MTV will air the global video premiere of “Love For Sale” and additional songs to be announced at a later date.
“Love for Sale” album releases.
A new concert special with Gaga and Bennett filmed at Radio City Music Hall in August will air on CBS Television Network and be available to stream live and on demand on Paramount+.
Winter 2021
MTV’s “Unplugged” with Gaga and Bennett, taped earlier this summer in front of an intimate studio audience in New York City, will air.
“The Lady and the Legend,” new documentary which chronicles the making of the duo’s new album will air on Paramount+.