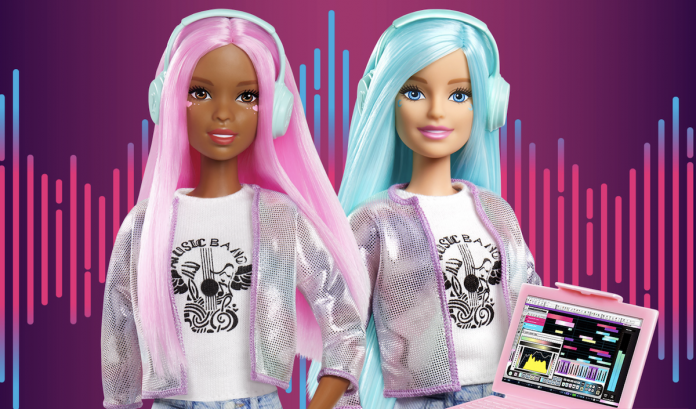 With women making up less than 3% of music producer, Barbie has parnered with MTV, Ester Dean & Girls Make Beats to inspire and empower.

Music Producer Barbie has arrived in 2021, not a moment too soon.

Mattel just announced Music Producer as Barbie’s Career of the Year as part of its Dream Gap Project. The ongoing global initiative launched in 2018 as a means to gives girls the resources and support they need to continue believing in themselves.

“With over 200 careers and counting, Barbie is mixing it up as a music producer to show girls more role models in this space and encourage purposeful play through careers they may not be familiar with,” a press release states.

As part of our ongoing Dream Gap Project, Barbie is dedicated to leveling the playing field for girls in careers where women are underrepresented, like music producer. By exposing girls to inspiring women excelling in this role, like Ester Dean, and by highlighting the music producer career with dolls, Barbie is reminding girls of their limitless potential. Our partnership with Girls Make Beats takes our efforts one step further, championing female voices from the studio to the stage and giving girls the tools to help them pursue a future as a music producer.

I am honored to lend my voice to Barbie to inspire young girls to learn more about becoming a music producer. While female voices are heard from the stage, so many critical decisions are made behind the scenes and in the studio. Having been in the industry for over a decade, I’ve witnessed the power female voices can have in shaping the future of music production and want to ensure more women are in the room.

Barbie will host a live webinar with Girls Make Beats and Ester Dean, open to girls ages 5-17, in an effort to help empower future music producers. More info and sign up here.

In addition, Barbie and MTV will host an hour-long takeover of MTV’s Saturday Music Video Block to feature music hits produced exclusively by women. It happens on September 18 at 8 AM ET.