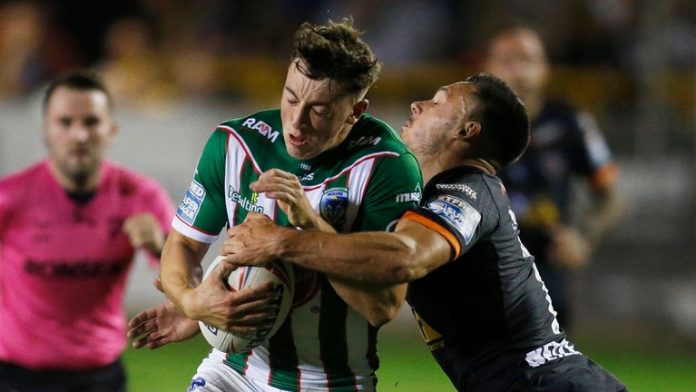 Daryl Powell’s eight-year spell as Castleford coach was brought to an end by the team he will coach in 2022 as the Tigers were beaten 40-24 at home to Warrington in the last round of the regular Super League season.

The Tigers needed a win to secure a play-off spot but never fully recovered from a disastrous first half as two tries apiece from centre Jake Mamo, who will be a Castleford player in 2022, and full-back Matty Ashton put the Wolves into a seemingly-unassailable 26-0 lead by half-time.

Ashton went on to complete his hat-trick three minutes into the second half to stretch the advantage to 32-0 before Castleford staged a dramatic revival, highlighted by two tries from centre Peter Mata’utia in his last match before he joins the Wolves.

Warrington paid a heavy price for their indiscipline, with winger Josh Charnley sin-binned for a dangerous tackle and prop Mike Cooper sent off for use of his shoulder, but they regrouped in time to complete the win.

Castleford’s defeat means Leeds and Hull KR are guaranteed play-off spots before they meet at Headingley on Friday night, with Warrington hosting the losers in next Friday’s elimination play-off.

It is not quite all over for the Tigers because, as the seventh-placed team, they will go on standby and continue with Covid-19 protocols in case one of the teams in the elimination play-offs is unable to fulfil their fixture – but that will be of little consolation to Powell, who was hoping to end his tenure on a high.

There was also no fairytale finish for captain Michael Shenton, who this week announced his retirement and whose career was brought to an end three minutes before half-time when he went off with a dislocated shoulder.

Castleford started with plenty of energy and purpose but they could not back it up with execution, whereas their visitors were clinical to the extreme.

Mamo made his first valuable contribution just five minutes in, switching the point of attack from the right and following the ball so that he was in a position to get on the end of a break by second-rower Ben Currie and send Ashton over for the opening try.

Mamo then supported a clean break by evergreen prop Chris Hill and Stefan Ratchford, playing at hooker in the absence of both of the club’s specialist number nines, kicked his second conversion before adding a penalty to make it 14-0.

When Castleford full-back Niall Evalds uncharacteristically hesitated going for a kick from Gareth Widdop, Ashton profited from a kind bounce to score his second try and Mamo grabbed his second after 30 minutes, scorching 80 metres after swooping on a loose ball.

Castleford managed to create a few chances but winger Derrell Olpherts dropped a pass 10 metres out from the Warrington line and centre Mata’utia was inches away from touching down Gareth O’Brien’s grubber kick.

Warrington took advantage of their opponents’ misfiring attack three minutes into the second half when substitute prop Rob Mulhern picked up a loose ball and got Ashton away for his hat-trick.

Mata’utia sparked the fightback with two tries in four minutes, both after smart handling from Evalds, and Castleford managed to maintain the momentum when Charnley was shown a yellow card for a bad tackle on Turner.

The home side took advantage of the extra man, working Turner over on the overlap, before prop Grant Millington – playing his last-ever match – scored their fourth try as he followed up a high kick from O’Brien.

Danny Richardson kicked all four conversions to narrow the gap to eight points and Cas fans sensed victory when Cooper was sent off, temporarily reducing the visitors to 11 men.

However, Ratchford eased the growing anxiety in the Wolves camp with a 69th-minute penalty and centre Connor Wrench added the finishing touches with a late solo try, which was converted by Widdop.