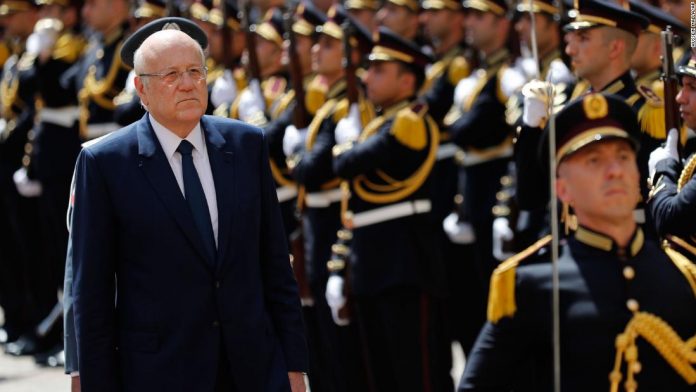 In his first interview with an international media outlet since forming a government a week ago, Mikati acknowledged that some Lebanese would struggle to put their faith in him and his government after so many politicians have failed them in the past.
But, he told CNN, it is “time to have a government” to take decisions and end the country’s political vacuum, before elections that are planned for next May.
“I’m doing the quick, the quick fixes that (need) to be done immediately, especially energy, health, education, work and transparency, and show the Lebanese that there is a governance. There is a transparency. That’s what we are trying to do. And hopefully it will take,” he said. He did not clarify how he would carry out these fixes.
Mikati, a billionaire who served previously as caretaker prime minister in 2005 and 2011, heads a cabinet that will preside over an economic depression which the World Bank considers one of the world’s worst since the mid-19th century.
And while there are new faces in the government, many have been handpicked by the same political establishment and groups blamed for the corruption that led to the country’s economic breakdown.
One of the most urgent economic issues facing the new government is the country’s expensive subsidies program.
The Lebanese government increased oil prices by more than 37% on Friday, as the country continues removing subsidies on imports in an attempt to attract international monetary aid.
The decision is expected to increase prices for the Lebanese people, who are already struggling with soaring poverty levels.
But according to Mikati, some 74% of more than $10 billion dollars in subsidies was “misused by traders, by corrupt people” in Lebanon over the past year — and the program is unsustainable.
“The subsidies are almost lifted because we don’t have any more cash or reserves to subsidize oil or other commodities,” Mikati told CNN. “We are going to keep the subsidies on medicine, but subsidies on other commodities will be lifted.”
It is important to end the subsidies to start negotiations with the International Monetary Fund, World Bank and the international community, Mikati said.
Lebanon’s Central Bank issued a statement last month saying that the fuel subsidies were being exploited by businesses. Around $800 million was paid in import subsidies in July alone, yet fuel shortages were still rampant.

Lebanon has spent 13 months without a fully formed government since former PM Hassan Diab stepped down after a deadly explosion ripped through Beirut’s port last year.
It is now in need of support from the Arab world, Mikati said.
“Lebanon is a tiny small country in the Arab world, and we are looking for the big brother from all Arab countries to come take our hand, and to take Lebanon [out] from this mess,” Mikati said. “A stable Lebanon will benefit the entire Arab world.”
Asked about the presence of Hezbollah allies in his government, Mikati said: “Hezbollah as a political party exists in Lebanon… I cannot bypass this party.”
Arab countries have yet to call Mikati since the formation of his government last week, however he remains optimistic that he will receive “a positive response,” Mikati said.
The Prime Minister added that he had received calls from members of the US administration in the past week, all of whom were supportive of his government, but that US President Joe Biden had not called him.
On Thursday, Hezbollah paraded tankers filled with Iranian fuel in Lebanon’s Bekaa valley in defiance of US sanctions. However, Mikati said that fuel shipment was not approved by the Lebanese government.
“The Lebanese government didn’t approve this … so I don’t believe Lebanese government would be subject to any sanctions,” he said.
Meanwhile, more than a year after the port blast, there are still many unanswered questions about what led to the tragedy.
Mikati reiterated that he is calling for an international investigation into the explosion. “I cannot say who, but definitely there is someone to blame,” he said.