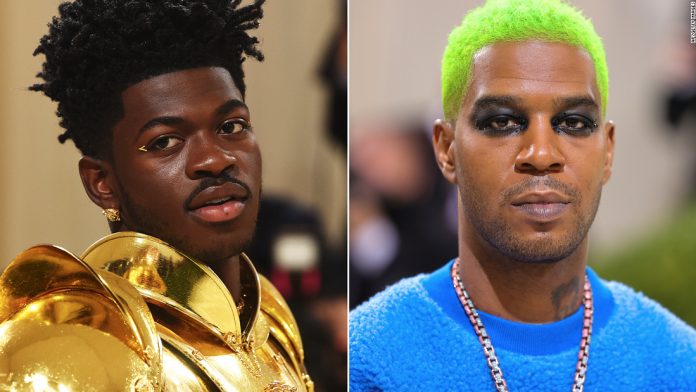 When Lil Nas X dropped the tracklist for his debut album “Montero” earlier this month, some people criticized the young rapper for having no Black men featured, despite having multiple Black women on the album.
In response, Lil Nas X wrote, “maybe a lot of them just don’t wanna work with me.”
That made veteran rapper Kid Cudi “sad,” Cudi wrote in a piece for Time’s “100 Most Influential People” while praising Lil Nas X.
“There’s a homophobic cloud over hip-hop, and he’s going to break that sh-t down,” Kid Cudi wrote in the piece, published Wednesday. “We have to stand with him. I’m going to do whatever I have to do to let him know — you have my support.”
Since coming out as gay, Lil Nas X has been the subject of rampant backlash from some members of the hip-hop community who have painted him and his sexuality as a threat to Black men. This happened most notably when rapper Boosie used slurs against Lil Nas X, threatening to “beat [Lil Nas X’s] a**.” Boosie’s comments came days after rapper DaBaby insulted gay men and shared misinformation about HIV during a performance at the music festival Rolling Loud.
“To have a gay man in hip-hop doing his thing, crushing records — that is huge for us and for Black excellence,” Kid Cudi wrote Wednesday. “The way he’s unafraid to make people uncomfortable is so rock ‘n’ roll. He’s a true rock star.”
After months of teasing, Lil Nas X’s debut album “Montero” finally dropped Friday. Though there’s no Kid Cudi feature yet, Lil Nas X did hint on Twitter earlier this month that it could be coming on a deluxe version.