Home Lifestyle A Velour Sweatshirt for Foodies, Retro Watches, and More of This Week’s... 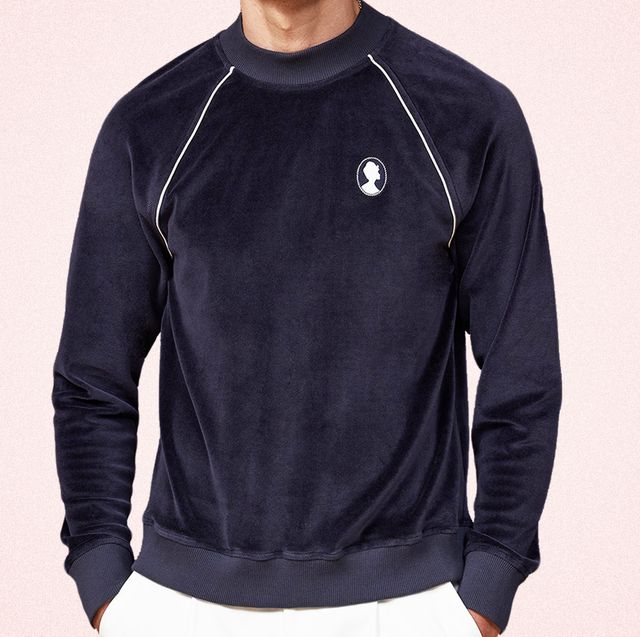 We are taking a trip back to the future with this week’s menswear releases. Let’s begin from the bottom up with Vans. The footwear label has two collabs: The first with A$AP Rocky on a refresh of the classic Slip-On sneaker, which debuted in 1977, and the second with Noah on an update of the Authentic. And Converse has offered up the Weapon CX, kicks that feature the return of the Y-Bar and Star Chevron branding from the ’80s.

As we move further up the body, restaurateur Mario Carbone has made his way into the sartorial sphere with a collection that is inspired by NYC in the decade of excess, and British outfitter Boden has dropped best-sellers from its 30-year history. Also celebrating milestones is Timex, which partnered with Coco-Cola on three watches that commemorates the 50th anniversary of the company’s iconic “Hilltop” television commercial. And not to be outdone are two other timepieces: Daily Paper reimagines G-Shock’s DW-5600 model, and Accutron re-releases its ’60s Football watch just in time for NFL season.

As is often the case in fashion, what’s old is new again. But when the items on offer look this good, they are definitely worth bringing back. So cop the styles that you now know will stand the test of time.

Fresh off the heels of his entrance at this year’s Met Gala, A$AP Rocky, who is a guest artistic director at PacSun, has released new kicks with Vans. Called the the A$AP Worldwide Classic Slip-On, the new shoe blends two of the rappers favorites styles from the footwear brand: the silhouette of the stalwart Slip-On and the sidestripe on the Old Skool.

After two years in development, Zara, the Spain-based fast-fashion behemoth, has released a collection of essentials that every man needs in his wardrobe. Called Zara Origins, the 205-piece line—which includes selvedge denim, wool sweaters, toppers made of technical fibers, and more—isn’t intended for quick consumption, but to last the long haul.

It’s the start of London Fashion Week, when some of the hottest burgeoning names—from Bianca Saunders and Grace Wales Bonner to Maximilian Davis and Stefan Cooke—in the fashion industry are set to debut their collections for spring 2022. But before you see what they’ve cooked up, Matches Fashion has dropped their eye-catching, forward-thinking designs for fall 2021. All the aforementioned talents and more are part of the retailer’s The Innovators Program, which helps fosters these talents, bringing them to the global stage.

Daily Paper is getting into the watch game, and it has enlisted G-Shock as its doubles partner. The new digital timepiece is based on G-Shock’s DW-5600 model, which was released in the ’80s, and  features a water-resistant case and a scratch-resistant, LCD dial.

When it comes to techwear, very few can rival the prowess of Stone Island. The brand constantly offers the sleekest, ergonomic fits made of innovative tech materials. Case in point: This down bomber jacket from the just-released fall 2021 collection, which is made of durable, abrasion-resistant fabric, and a features reflective “Rain Camo” print that is visible when hit by light.

Our Lady of Rocco

The behind man behind Carbone—one of New York’s hottest, hard-to-book Italian restaurants—is offering something new and tasty. In partnership with knitwear label La Ligne, Mario Carbone has introduced a 19-piece collection of velour sweaters, satin bombers, track suits, and pinstripe trousers and jackets. Named Our Lady of Rocco, the line is inspired by the styles he saw growing up in the Big Apple in the ’80s. It’s exactly right for wise guys in all senses of the phrase.

Transitional season is on the horizon, and here to help with this precarious time between summer and autumn is Alpha Industries’s pre-fall 2021 collection, which includes this sleek quilted liner. It’s the perfect mid layer to wear for temperate nights out.

Timex has gone back in time to 1971, when Coca-Cola released the slogan “Buy the World a Coke” and the famous “Hilltop” commercial. The watch company has released the Unity Collection, which comprises three retro-inspired timepieces that commemorate the 50th anniversary of the soft drink corporation’s iconic advertising campaign.

When life gives you lemons, make them into a sweet track jacket. That’s exactly what Stadium Goods has done when it partnered with Los Angeles-based muralist Erin D. Garcia. The zesty topper is part of a 13-piece capsule collection called “Paraiso: Above the Clouds,” which includes a tee with prints of fruits and hoodies and shorts with oranges. So go ahead, take a bite.

Sophnet, a Japanese streetwear label, and Gramicci, a purveyor of the mountainwear, have joined forces on a collection that blends the best versions of town and country.  These loose-fit wool and cordura nylon pants, for example, taper elegantly toward the hem.  Indeed, they work just as well for the office as they do the great outdoors.

To celebrate 30 years in the biz, Boden has released an anniversary collection of 56 items that all nod to the brand’s British roots. On offer are argyle and cable-knit sweaters, corduroy trousers, wool beanies, and field jackets. But what really catches our eye is this lambswool Fair Isle sweater vest, because the style is so hot right now.

Noah and Vans have joined forces one again, this time on a five-piece collection, which includes a refresh of the Authentic silhouette (alongside a couple riffs on the Half Cab). Available in black, olive green, and wheat, the style is covered in a tonal suede upper, and will pair nicely with selvedge jeans.

NFL season is upon us, and if you watch to keep track of the games in style, Accutron has the timepiece for you. As part of its Legacy collection, the brand has brought back its “203 Football Gold Relief,” so named because the shape of the case is reminiscent of a, you guessed it, football.

Converse is throwing it back with the Weapon CX, a sneaker that takes inspiration from the brand’s basketball kicks from ’80s, and features the return of elements like the Y-Bar and Star Chevron branding. New additions include an exaggerated silhouette and a thick foam midsole.

If you’ve wandered around SoHo or La Cinema Blvd. lately, you’ve most likely seen the towering billboard of Naomi Campbell outfitted in skivvies from the latest collab between Kith and Calvin Klein. The new collection, of course, features a range of sporty underwear, but there are pajama sets, bucket hats, and one of the chicest bathrobes around, too.

Liv Bishop is an emerging artist based in Georgia whose works centers around mental health and the idea of self-love in women. Bringing the message to the masses is The Phoenix Brand, which cast her design on two large handkerchiefs, as part of the label’s artist bandana series.

Hiro Clark
Barry Samaha Barry Samaha is the style commerce editor at Esquire, where he covers all things fashion and grooming.