Home Sport All Blacks brush aside Pumas to top rankings 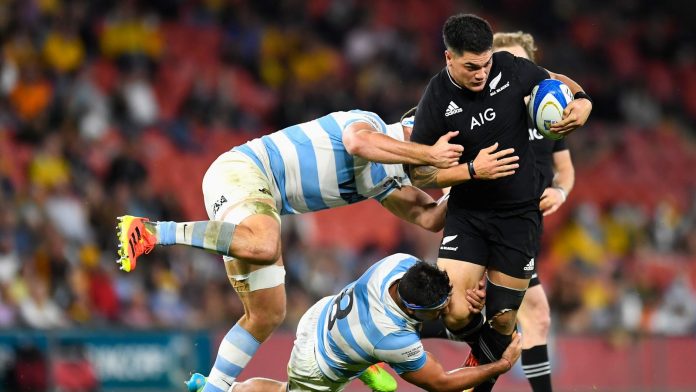 The All Blacks remain unbeaten in this year’s Rugby Championship after making it four wins out of four courtesy of a five-try victory over a determined Pumas side.

New Zealand snatched South Africa’s world No 1 ranking and placed one hand on the Rugby Championship trophy after subjecting Argentina to a second successive thrashing within a week in Brisbane on Saturday.

The All Blacks’ 36-13 bonus-point victory in front of 38,000 at Brisbane’s Suncorp Stadium extended their lead to 10 points over second-placed South Africa in the Rugby Championship table while knocking Argentina and Australia out of the tournament.

South Africa, beaten 30-17 by Australia in the first match of Saturday’s double-header, will need to defeat New Zealand twice and pile on the tries in their last two matches to earn bonus points to have any hope of stealing the silverware.

The scale of the Springboks’ task was underlined as a second-string All Blacks team ran over five tries to notch their fourth win from four matches in a dominant campaign.

It could have been much worse for Argentina as Ian Foster’s side missed out on three tries in the first half and another in the second.

Two early tries were cancelled due to forward passes and a third to Rieko Ioane was ruled out before half-time after the centre lunged over illegally when brought down under the posts.

Young scrum-half Finlay Christie blew the fourth when he fumbled the ball forward a metre out from an undefended line.

The injury-hit Pumas slumped to their fourth successive loss after opening defeats away to South Africa, but it was a better performance by Mario Ledesma’s side.

The All Blacks took a 24-3 lead into the second half but Pumas winger Emiliano Boffelli grabbed a 51st-minute try and his conversion shaved the deficit to 16 points.

But New Zealand defended strongly in the last quarter before Vaa’i cantered over unmarked three minutes from the siren for his second try as a tired defence surrendered.

The big match next Saturday in the double-header in Townsville, in the north of Australia’s Queensland state, is the 100th Test between the All Blacks and the Springboks.