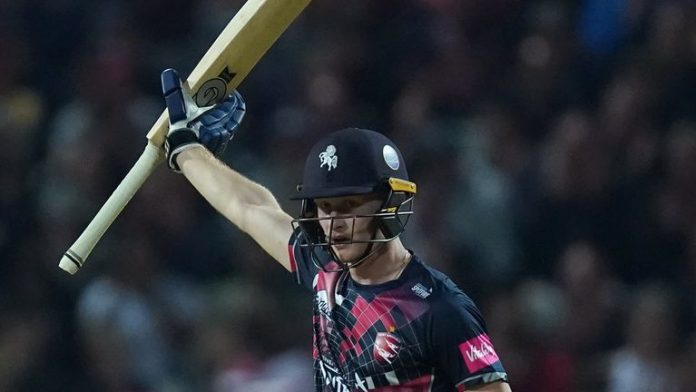 Jordan Cox’s 58 not out from just 28 balls enabled Kent Spitfires to post 167-7 in the Vitality Blast final against Somerset, with Joe Denly taking 3-31 and Qais Ahmad 2-19 to restrict Somerset to 142-9 in reply at Edgbaston

Jordan Cox blazed an unbeaten half-century before starring with an extraordinary piece of fielding as Kent Spitfires overcame Somerset by 25 runs to secure their first Vitality Blast title since 2007.

Cox hammered 58 not out from 28 balls to rescue the Spitfires from a mid-innings slump at Edgbaston and ensure they posted a competitive total of 167-7.

Spinner Roelof van der Merwe took 3-19 for Somerset – who have now lost four T20 finals in a row, but looked on course to snap that sequence after progressing to 61-2 in the ninth over of their reply.

However, they subsided to 142-9. aided by Cox’s dazzling leap on the boundary to prevent a six for Somerset skipper Lewis Gregory and instead set up the catch for Spitfires team-mate Matt Milnes.

What a night Cox is having!

Now he brilliantly claws back a certain six to set up a relay catch for Milnes and get rid of Gregory!💪

Put in to bat, Kent made a steady rather than explosive start as Zak Crawley and Daniel Bell-Drummond put on 44 from 32 – but the momentum shifted once Somerset turned to Van der Merwe.

The spinner struck twice in as many deliveries, persuading Bell-Drummond to sweep him straight to midwicket before Joe Denly gave him the charge immediately and skied it, with Tom Abell racing back from mid-off to complete a magnificent catch over his shoulder.

Bowling in tandem with fellow left-armer Lewis Goldsworthy (1-27), Van der Merwe stemmed the flow of runs and, when Kent skipper Sam Billings drove him to cover, the Spitfires were suddenly stuttering at 52-3.

Crawley (41 from 33) did his best to hold the innings together, but he eventually pulled Goldsworthy into the hands of deep midwicket and it was left to Jack Leaning (27 from 29) and Cox to lead the Kent fightback.

A below-par total still looked on the cards until Cox came to life during the final two overs, slamming Marchant de Lange for two sixes and then taking 14 off the last three balls of the innings from Josh Davey.

That knock lifted Kent’s spirits – which rose even higher after just 11 balls of the Somerset reply as they reduced their opponents to 3-2.

Tom Banton departed for a golden duck, stumped as he lost his balance trying to pick Denly and then Goldsworthy miscued Fred Klaassen to backward point, only for Will Smeed and Tom Abell (26 from 20) to drag the pendulum back in favour of the West Country side.

The pair both struck Denly for sixes and built a partnership of 58 from 40, eventually broken when Qais Ahmad had Abell caught on the off side – and Smeed (43 from 32) followed soon after following an extraordinary incident.

Bizarre! Cox’s boundary catch is ruled a six because he was in contact with a team-mate touching the fence…

Then Cox takes another catch to dismiss Smeed for 43!👏

Cox took a legitimate boundary catch to dismiss the Somerset opener – but because he had made contact with fellow fielder Bell-Drummond, who slid into the boundary cushion, the umpires awarded a six instead.

However, Cox was not fuming for long – two balls later Smeed skied a Denly full toss and he eagerly gobbled up the catch again. But the Kent player’s most eye-catching piece of fielding was yet to come.

Gregory’s leg-side pull off Darren Stevens looked a certain six – yet Cox leapt on the boundary and clawed the ball back for Milnes to complete the catch as Somerset’s collapse gathered pace.

Abell racing back from mid-off, takes Denly over his shoulder – and Van der Merwe has two in two balls for Somerset!👏

Denly finished with 3-31, with Qais taking 2-19 and, although Davey and De Lange rallied late on, they could do nothing to deny the Spitfires the trophy.

Watch the second ODI between England Women and New Zealand Women, live on Sky Sports Cricket from 10.30am on Sunday.

You can also watch the resumption of the Indian Premier League, with Chennai Super Kings facing Mumbai Indians, via the red button from 2.50pm.