Home World A Parisian landmark is cloaked from view 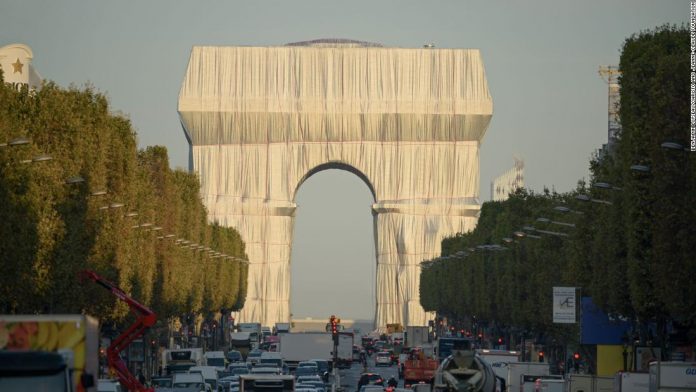 After three months of construction work at Paris’ famed Arc de Triomphe, the 160-foot-tall war monument has been completely concealed. The landmark, built during Napoleon’s reign, has been outfitted in 270,000 square feet of silver-blue polypropylene fabric bound with red ropes.

Encasing the Arc de Triomphe in cloth was a longstanding vision of the late artists Christo and Jeanne-Claude — one that finally came into focus this summer. It began with 400 tons of steel beams erected like a metal jacket around the structure, followed by the wrapping, which was conducted by a team of climbers over the course of a few days. Following the project’s completion on Thursday, the arch will remain transformed for just 16 days.

The unveiling of the installation, officially titled “L’Arc de Triomphe, Wrapped,” comes 60 years after Christo first became enthralled with the idea of wrapping the monument, more than a decade after Jeanne-Claude’s death and over a year since Christo passed away last May. Originally scheduled for spring 2020, the project was first delayed out of concern for nesting kestrel falcons in the arch, and then because of the ongoing pandemic.

Like many of Christo and Jeanne-Claude’s other projects, “L’Arc de Triomphe, Wrapped” is poised to be a fleeting, sublime encounter with an environmental artwork that interrupts the experience of the everyday.

Christo in his studio in New York City with a preparatory drawing for “L’Arc de Triomphe, Wrapped” in 2019. Credit: Wolfgang Volz/Courtesy Christo and Jeanne-Claude Foundation

Vladimir Yavachev, Christo’s nephew and the project’s director of operations who worked with the artist for 30 years, explained that the shimmering color of the fabric and vivid ropes are Christo’s “poetic interpretation” of the blue, white and red of the French flag.

“He liked colors that also change with the weather, or the time of day,” Yavachev said in a video interview, adding: “The fabric is very reminiscent of Paris rooftops… which are very silvery gray.”

They used textiles to transform the natural world, too — everything from an 18,600-square-meter (200,000-square-foot) orange curtain, hung between two mountain slopes in Colorado, to a series of islands near Miami encircled in bubblegum pink fabric. A series of thousands of saffron-paneled gateways in New York’s Central Park, unveiled in 2005, was the last project they completed together before Jeanne-Claude suffered a fatal brain aneurysm.

The construction for “L’Arc de Triomphe, Wrapped,” which took almost 12 weeks of nearly 24-hour work, was a more intense process than people might think, said Yavachev.

“It’s the perception of a lot of people that we just go there (to the Arc de Triomphe), throw some fabric and put some ropes (on it) and that’s it,” he said. “But that’s not at all the case.”

Christo and Jeanne Claude devised installations that could take decades to complete, requiring extensive permit approvals, legal hurdles and, often, environmental impact tests. (Some of the artists’ rejected or abandoned projects include wrapping the Whitney Museum of American Art in New York City, as well as suspending nearly 6 miles of fabric above the Arkansas River in Colorado.)

Christo didn’t pursue wrapping the Arc de Triomphe until 2017. Having declined the chance to carry out an intervention in the piazza of the Centre Pompidou, he said the only project he would consider in Paris was wrapping the Arc. In an interview with CNN just before his death, however, he confided that he “never believed” they would receive permission.

“I am an artist who is totally irrational, totally irresponsible, completely free,” Christo said. “Nobody needs my projects,” he added. “The world can live without these projects. But I need them and my friends (do).”

Anne Burghartz, an engineer on the project, said her team’s first task was to interpret the final form that Christo wanted. “In his drawings, you can see the shape is not 100% the Arc de Triomphe,” she said in a video interview. “It’s very boxy, it has vertical lines, whereas the Arc de Triomphe at the cornices, for example, is very pointy-shaped.”

They also had to determine how to keep the wind from dragging the fabric, while keeping it pliable to the elements. “(Christo) was also very fond of how he imagined the fabric would come alive with the wind,” she said.

Though machinery and advanced technology were used in the planning and installation of the protective steel beams, a team of climbers carried out the wrapping. Credit: Wolfgang Volz/Courtesy Christo and Jeanne-Claude Foundation

But, most importantly, Burghartz’s team had to protect the monument and all of its ornamentation, from the sculpted figures flanking each side of the entrance to the intricate cornices. Though the engineers had permission to drill some holes in the landmark they had to minimize damage. So, they installed wood panels between the steel and the arch’s concrete to protect it from scratches and built frameworks around its sculptures to keep them safe.

“​​Some of the statues have wings, they have swords, they have trumpets,” Burghartz said. “So we built these cages around the statues to protect them from the fabric, from the climbers and from the construction site work.”

To help build the outer structure, technicians used laser technology to survey the monument. The entire Arc de Triomphe was scanned by a drone, producing precise high-resolution images for the engineering team.

In total, the project cost around 14 million euros ($16.5 million). But like all of Christo and Jeanne-Claude’s projects, the “L’Arc de Triomphe, Wrapped” will, according to a spokesperson for the project, be entirely funded through the sale of preparatory drawings and other original artworks. Sotheby’s Paris is hosting an exhibition and private sale featuring 25 of the artworks, with proceed going towards the project and the artists’ foundation.

“For Christo, the most important thing was freedom,” Yavachev said. “He and Jeanne-Claude did not want to (give up their) freedom by accepting grants or money or sponsorship from anybody else.”

“The London Mastaba” on Serpentine Lake was a smaller version of Christo and Jeanne Claude’s final, posthumous project, which will be built in Abu Dhabi. Credit: Wolfgang Volz/Christo and Jeanne-Claude Foundation

This posthumous installation will be one of the late artists’ final acts, but they have at least one more feat in store: building the world’s largest sculpture. The Mastaba, conceived in 1977 and influenced by the architecture of Ancient Egyptian tombs, will be made of 410,000 multi-colored barrels in the Abu Dhabi desert. It’s a giant version of the last artwork Christo executed during his lifetime, a colorful mastaba sculpture in London’s Serpentine Lake in 2018. The Abu Dhabi installation will be the last major work that the artists’ team has the blueprints for, according to Yavachev.