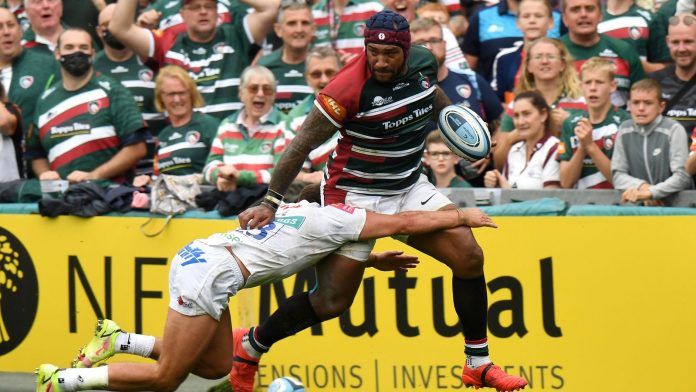 Round One of the new Gallagher Premiership saw plenty of action with the Tigers seeing off the Chiefs, while Worcester beat London Irish and Saints got past Gloucester.

Leicester, Worcester and Northampton got their Gallagher Premiership campaigns off to winning starts.

Genge was at the helm for a 34-19 win against last season’s league runners-up as Freddie Steward, Harry Potter and Matt Scott ran in tries before Nic Dolly added two more.

Leicester were comfortable winners as Exeter were toppled on the opening weekend of the campaign for the first time since 2017 with Dolly’s first touch down in the 60th minute taking the game beyond their reach.

The Tigers showed greater enterprise throughout and possessed more strings to their bow than an underpowered Exeter, whose pack struggled to convert opportunities close to the line.

George Ford efficiently directed operations while full-back Steward and wing Nemani Nadolo were a handful all afternoon, but Leicester’s attacking flourishes were matched by the commitment in defence where Genge, George Martin and Dan Cole were prominent.

They led 20-5 at half-time and while Exeter briefly threatened a fightback in the third quarter, it never materialised on a disappointing afternoon for the two-time champions.

Northampton got their Premiership season off to a winning start over an injury-ravaged Gloucester in a lively game at Franklin’s Gardens.

Depleted Gloucester contributed fully to the entertainment but two yellow cards and a high penalty count against them proved costly.

Ollie Thorley, Jordy Reid and Jonny May scored Gloucester’s tries, with Lloyd Evans kicking a penalty and a conversion.

England international Willi Heinz scored a try on his Gallagher Premiership debut for Worcester as the Warriors beat London Irish 36-24 at Sixways.

The former Gloucester number nine is among more than a dozen newcomers to Worcester’s squad this season.

🍾 Congratulations to @OLawrence1 who was voted Starkey Electrical Warrior of the Match. pic.twitter.com/zIlmg3cWVW

All of the Warriors’ other league victories last term were coronavirus-related forfeits and head coach Jonathan Thomas could not have asked for a better opening weekend display.

Irish replied through tries for wing Ollie Hassell-Collins, number eight Albert Tuisue and a double by substitute prop Ollie Hoskins, but Paddy Jackson had an off-day from the goalkicking tee, landing two conversions, and they never seriously threatened to halt Worcester’s momentum.