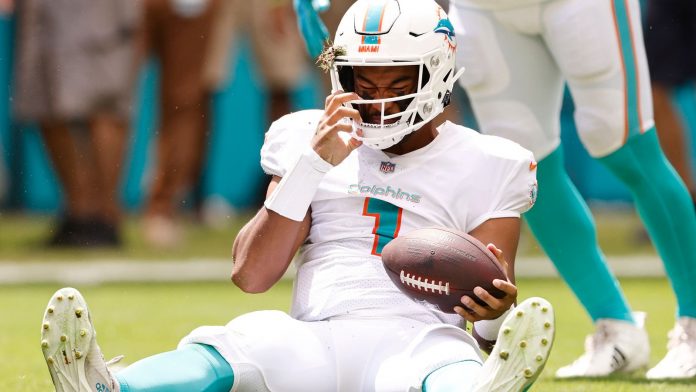 Miami Dolphins quarterback Tua Tagovailoa was knocked out of their heavy Week Two defeat to the Buffalo Bills after picking up a rib injury in the first quarter.

While X-rays did not reveal a break, NFL Network’s Tom Pelissero reported that the second-year QB is in a lot of pain and will have an MRI on Monday to see if there’s any cartilage damage.

Tua was attempting a short pass on a fourth-and-2 play when he was hit hard by Buffalo defensive end A.J. Epenesa﻿, and came up holding his ribs. He was carted off to the locker room and did not return to the field as Miami suffered a blowout 35-0 loss at home.

Wentz, Dalton and Taylor other QBs out injured

Tua wasn’t the only quarterback to go down on Sunday night in the NFL. Indianapolis Colts QB Carson Wentz﻿ exited late in the fourth quarter of their loss to the Los Angeles Rams after suffering an ankle injury.

The Colts starter hobbled off the field after being knocked to the ground by reigning Defensive Player of the Year Aaron Donald. He was replaced by Jacob Eason, who was intercepted on his first drive, and the Rams held on for a tight 27-24 win.

Colts head Coach Frank Reich did not have an update on Wentz after the game, other than to say he’ll undergo further evaluation.

Chicago Bears starting quarterback Andy Dalton suffered a knee injury in the first half of their 20-17 win over his former team, the Cincinnati Bengals.

Dalton tweaked his knee on a 14-yard scramble, walking gingerly on the sideline. The starter returned the next series, but then limped to the locker room to give way to rookie Justin Fields﻿.

Bears head coach Matt Nagy said after the game that they will know more about Dalton’s knee injury in the next 24 to 48 hours, but he does not believe that Dalton suffered a serious ACL injury.

Houston Texans’ Tyrod Taylor was ruled out of their 31-21 loss to the Cleveland Browns due to a hamstring injury suffered towards the end of the first half.

Head coach David Culley told reporters after the game that it is not clear if Taylor will be able to play this Thursday when Houston hosts the Carolina Panthers.

Rookie Davis Mills replaced Taylor with the game tied 14-14 and the former Stamford QB completed eight of his 18 passes for 102 yards, tossing one touchdown and one interception.

The NFL’s highest-paid defender, Pittsburgh Steelers edge rusher T.J. Watt suffered a groin injury in the first half of their 26-17 loss to the Las Vegas Raiders.

Watt exited midway through second quarter, after recording four tackles and a sack early on in the contest.

Philadelphia Eagles defensive end Brandon Graham left their 17-11 loss to the San Francisco 49ers with an ankle injury. The initial diagnosis from the team is a torn Achilles,

Graham will undergo an MRI on Monday morning to confirm, but head coach Nick Sirianni said the team was “fearful” Graham suffered a serious injury.

Cleveland Browns receiver Jarvis Landry suffered a knee injury in the first quarter against the Texans. Head coach Kevin Stefanski said after the game that Landry has an MCL injury and will undergo an MRI.

For the latest news, features and interviews, stay across skysports.com/nfl and on follow us on Twitter @SkySportsNFL.