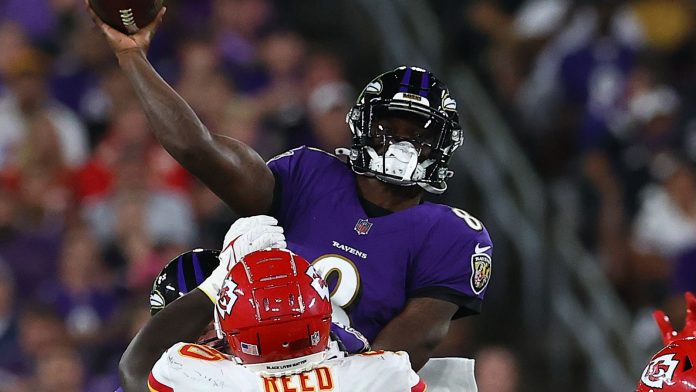 Baltimore Ravens quarterback Lamar Jackson throws for 239 yards, with one touchdown and two interceptions, adding 107 yards and two scores off 16 carries on the ground; Kansas City Chiefs’ Patrick Mahomes throws for 343 yards, with three TDs and one interception

Lamar Jackson overcame two first-quarter interceptions to earn a first career win over Patrick Mahomes and the Kansas City Chiefs at the fourth time of asking, as the Baltimore Ravens ran out 36-35 winners in a Sunday night thriller.

Ravens quarterback Jackson had referred to the Chiefs as his ‘Kryptonite’ after succumbing to a third-straight defeat to the side in Week Three of last season. And, with one of his two first-quarter picks returned for a touchdown to open this fourth meeting, it looked as if history was to repeat itself.

But no, Jackson kept the Ravens in the contest, going blow for blow with Mahomes – which included tossing a stunning 42-yard touchdown to Marquise Brown in mid-air – before Baltimore edged ahead in the fourth quarter with two scores on the ground from their star quarterback.

The second of Jackson’s goal-line TDs put the Ravens up by just one point (36-35) – after a second-straight two-point conversion try failed – and gave Mahomes the ball back with still three minutes and 18 seconds left on the clock to drive down the field and set-up a game-winning score.

But rookie linebacker Odafe Oweh, who had a superb game, forced a fumble on a Clyde Edwards-Helaire run on a 2nd-and-3 from the Baltimore 32-yard line to have the Ravens back the ball.

The home side were then quickly facing a 4th-and-1 on the next series, still with a minute on the clock, but rather than punt the ball back to KC, Jackson ran the ball and gained the yards needed to allow Baltimore to ice the game.

LAMAR FLIPS IN. The @ravens take the lead with 3:14 left!

Superstars on show as far as the eye could see. This game had everything, including a Tyrann Mathieu 34-yard pick-six score on the opening series, Jackson’s stunning hang-time touchdown pass to Brown, as well as an incredible 46-yard catch and run to the endzone from Travis Kelce.

Jackson was amazing! So too Mahomes. And, as already mentioned, Ravens rookie linebacker Oweh – taken with the No 31 pick in the 2021 NFL Draft – was everywhere on defense, hitting Mahomes on his INT and also coming up with arguably the game-wining play, his forced fumble in the fourth quarter.

The Ravens overcame Jackson’s early pick-six as Devin Duvernay scored on their next possession, snagging an airborne fumble by Ty’Son Williams.

The Chiefs quickly reclaimed the lead as Mahomes threw the first of his three touchdown passes, a 33-yarder to Demarcus Robinson before Jackson was picked off for a second time by Mathieu – this one not resulting in points.

Baltimore forged a 14-14 tie on a five-yard scoring run by Latavius Murray in the second quarter, but KC would go in 21-17 up at the break after a Darrel Williams two-yard TD was followed by a Justin Tucker 43-yard field goal for the hosts.

The game, if it was even possible, went up yet another level to start the second half. Byron Pringle first hauled in a 40-yard touchdown the Chiefs, before Jackson pulled off an incredible play on the subsequent series, throwing to a wide-open Brown while in mid-air for a 42-yard TD.

Kansas City answered straight back, with Kelce weaving through nearly the entire Ravens defense for an incredible 46-yard scoop and score of his own.

But, after Baltimore punted on their next possession, the Chiefs missed out on the chance to add to their 11-point lead as Mahomes threw his only interception for the game – and first ever in his career in the month of September – late in the third quarter.

Jackson then took over in the fourth quarter, leading his team down the field twice and finding the endzone himself to finish both drives. Then, after Oweh’s late forced fumble, it was the Baltimore QB’s run on 4th-and-1 that clinched a statement victory.

The Ravens (1-1) travel to Detroit on Sunday to take on the winless Lions (0-2), while the Chiefs (1-1) host their divisional rivals, the Los Angeles Chargers (1-1) in a key AFC West clash.