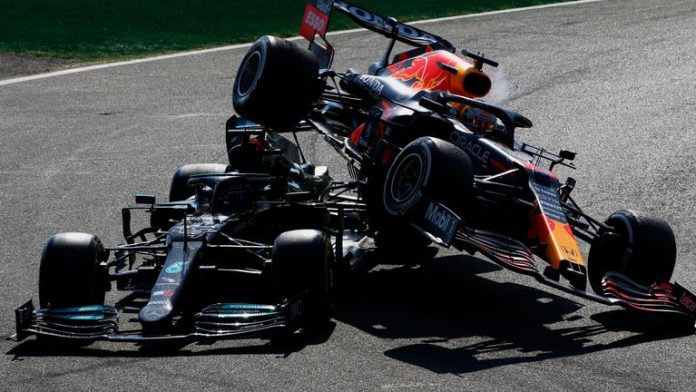 “They have to fight, it’s part of the game. Hopefully with the respect they need for their own team and their own results.” Alex Wurz discusses Lewis Hamilton vs Max Verstappen as next battle awaits at Russian GP, all live on Sky Sports F1

Lewis Hamilton and Max Verstappen are “very likely” to crash again before the end of their 2021 championship battle, believes Alex Wurz.

Wurz, the chairman of the Grand Prix Drivers’ Association, told Sky Sports News that Hamilton and Verstappen have “great respect for each other” but also “big racing egos” as he predicted a third collision between the pair, who are split by just five points in the title race and whose intense rivalry has escalated through an absorbing season.

“I think [it’s] very likely, to be honest,” said Wurz. “Both have to mark their territory.

“That’s sport, if you watch boxing, football, handball, whatever there is – when two greats are coming together, those things happen.”

F1 2021 continues with this weekend’s Russian GP, live only on Sky Sports F1, where Verstappen will be taking a grid penalty for his role in the dramatic Monza crash – his and Hamilton’s second of the season.

Wurz stressed his belief that both the British and Italian GPs shunts were “racing incidents”, and his hope that the duels “remained fair”.

“Outside the car I talk to both and they talk to each other, and they have great respect for each other, which is really nice to see,” he stated. “But on the other side, on the track it’s, ‘hey, we are here to fight, we are here to win the Formula 1 world championship’. It’s one of the most prestigious titles you can have in the world of sport.

“They have to fight, it’s part of the game. Hopefully with the respect they need for their own team and their own results, and not only for each other, because to finish first you have to finish, so they can’t afford too many crashes.”

Asked if he would give advice to the drivers he said had “big chests and big racing egos”, Wurz added: “There will be a conversation but you have to separate yourself from being in the car and making such decisions.

“They’re only humans, and they were angry, both of them because of bad pitstops and how the race unfolded, and you know you only have one opportunity.

“In this case maybe to an extent both cracked under this pressure and came together.”

Will Hamilton and Verstappen clashes continue?

F1 drivers’ chief Wurz isn’t the only one to think this could happen again.

“You’ve got two cockerels in the farmyard at the moment and we are seeing the consequence of it,” said Ross Brawn, F1’s managing director of motorsport, in his latest column.

“I don’t think either will back off at any moment for the rest of the year but I hope the championship is won on the track not in the barriers or the stewards room.”

Hamilton, who criticised Verstappen’s aggressive approach after their Monza crash and praised the stewards for penalising him, added: “This will continue until we have to learn from our scenarios on track, and I don’t have a history of these incidents.

“Ultimately, when you get away with things like that, then it’s easy just to continue to do it.”

The 2021 season continues with the Russian GP in Sochi, a Mercedes stronghold in recent years.

Verstappen will take at least a three-place grid penalty for the race, and possibly more if Red Bull decide to double up his penalty with a new engine and back-of-the-grid start.

Hamilton, meanwhile, has a great chance to retake the lead of the championship.

The whole weekend is live only on Sky Sports F1.